Skip to content
Continuing our profiles on JAF’s incredible 2013 Boston Marathon Team, here’s Gina Chupka, a chemist who believes “a girl never reveals her age.” (We’re with you, Gina!)  Originally from Westfield, Mass., she’s trekking back to Boston from her current home in Golden, Colorado, where she lives with her “awesome” husband Kris and menagerie of puppies and kitties.
We’re grateful you’re coming home to run for us, Gina, and proud Boston will be your 50th marathon in 50 states!
– Jen Andruzzi 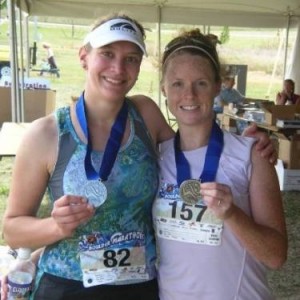 JAF: What inspired you to run for JAF this year?
Gina:  My Uncle Angelo passed away from cancer. I was really inspired by the stories of the people the Joe Andruzzi Foundation has helped. I cried when I read all of the stories on the website. The Boston Marathon is a dream three years in the making. Running for a charity is my way of paying it forward.
JAF: What’s your fundraising goal and how are you meeting it?
Gina: My goal is $2,620. I have the support of my friends and family, not to mention all the amazing people I have met on my 50-state journey. I also plan to have my friend Josh Blackburn (a local Colorado musician) play a benefit show to raise money. And I did a short video, talking about giving.
JAF: What’s on your marathon résumé?
Gina: About three years ago, on my birthday, I ran my third marathon in Green Bay, Wisconsin. At some point on that trip, I decided to run a marathon in every state, with the goal of finishing in Boston. The original plan was to finish before I was 40, then I decided to finish in 2014, then it became 2013….so, you get the idea. Now, I’ve run a marathon in 49 states. I have done 52 total marathons. The craziest streak was in 2012, when I ran 24 marathons in 24 states.
In running the 50 states, I have made friendships that will last my lifetime. I’ve met people like Keith Wood (the oldest competitor in Boston last year) and Larry Macon; he ran 140 marathons last year — I look like a slacker compared to him.
JAF: How do you train?
Gina: I did put in a lot of training for my first marathon in 2008. For the second and third, I did some training…now I sometimes don’t run at all between races. This does sound crazy (and I don’t recommend it to anyone), but in the end I feel (for me) that a marathon is 90 percent mental. For Boston, I will run a 50k in New Jersey and some shorter distances in between.
JAF: How do you stay motivated to train in winter?
Gina: I usually cross train inside by biking or doing kettlebells. But if I bundle up enough to stay warm, it’s really not that bad. Colorado is beautiful in the winter!
JAF: Do you do other charity work?
Gina: I have volunteered at our local animal shelter, at our Action Center, which provides food and clothing to people in need, and at the Easter Seals camp.
JAF: Give us a good marathon story!
Gina: When I ran in Kansas, I was having a bad day and I just didn’t feel good. There were tornado warnings and lots of wind. At the start of the race they told us to go into the nearest house if you saw a twister! By mile 16, I was just dead tired and started walking. I started talking to another guy that was walking, as well. He mentioned feeling bad too.
This was his first marathon and he just wanted to give up on running. At about mile 20, I pulled out my run/walk (Gymboss) timer and told him we would set it for one minute of walking, followed by one minute of running (because you can do anything for a minute). So we did a run/walk for the rest of the race and he made it! He gave me a huge hug and that was pretty cool. During those miles, we exchanged personal stories about living with a relative who had dementia (his father/my grandfather). It was very touching. (We also saw no tornados! At the end of the race, my husband and I jumped in the car and raced back to Colorado. That night, the areas surrounding Abilene, Kansas had lots of tornados.)
JAF: Got a theme song?
Gina: “This Girl is on Fire” by Alicia Keys inspires me. When that comes on the iPod, it’s go time! A song that is me: “Trouble” by Taylor Swift. That was my husband’s nickname for me when we started dating.
JAF: Who’s your favorite superhero? Any costumes in your closet?
Gina: Superhero…my Dad! Sure, I could run dressed up as him, but I’d have to shave my head.
JAF: How do you stay “upbeat” and motivated?
Gina: Even when I’m having a bad day, I always stop to think it could be worse. When is something REALLY the end of the world?
JAF: What would surprise non-runners about marathons?
Gina: How much the race is really mental after about 20 miles. How much of a motivator a huge crowd like Boston can be. In Chicago, I barely thought about any pain or discomfort.
JAF: What’s the best training snack?
Gina: A cold beer. No, really… it’s carbs, right? And pasta, of course!