JAF paid a full month of utilities for us. On top of the stresses of my cancer, what kept us awake at night were the bills. Knowing that was taken care of allowed us to finally get some sleep at night. It was a huge relief.

Tracey Cuzzupe has always loved a simple life. A typical day started with waking up and hopping on the stationary bike, having a quick breakfast, then heading off to teach pre-school. It was a simple routine and it was perfect for her.

She also loved to fish. Every chance she got, she would go out in the canoe with her husband Paul and their dog Rosco to do some fly fishing. Time on the water was pure joy. Her family also lived close by and she saw them all the time, including her four nieces who were a big part of her life. In whatever spare time she had left, she belly danced as a hobby.

But about a year after she and Paul were married, Tracey noticed a little lump on her right breast. She felt fine and decided it was just an irritation. She said nothing to Paul and put it out of her mind. But after a few weeks later when the lump didn’t go away, she mentioned it to her husband. He immediately took things very seriously, pressing her to call her doctor and leave a message saying she needed make an urgent appointment. This moment would be the beginning of a cancer journey that continues today. (May 2019)

Tracey went to the doctor, who immediately sent her for a mammogram and a biopsy. Tracey still believed it was nothing and that all this was probably unnecessary. But then the doctor sat down with Tracey and Paul after all the tests were done. They heard her use the words “This is serious”, and their mood changed instantly. Her eyes darted over to Paul, who looked back with wide eyes, and they both started crying.

Once they regained composure and were ready for the doctor to continue, the news got worse. Not only did she have cancer in the breast that had the lump, she had it in both. More tests and blood work were done. Tracey was then told she carried the BRCA 1 gene, and that anyone who carries this gene has a much higher risk of recurrence.

At the time, Tracey remembers she felt pretty clueless about it all. Despite the seriousness of the news, she says, “I actually kind of felt it was a blessing because it was something they could just remove. I kept thinking that they got it in time and all I have to do is just get through this.”

Tracey decided to take the most aggressive treatment option possible, which meant a double mastectomy and chemotherapy, which she would be on for almost seven months. She dealt with all the side-effects, including the loss of hair, fatigue and nausea. Then after her chemotherapy treatment was completed, she had reconstructive surgery. The good news? After all this was said and done, her follow up tests showed she was cancer-free. The treatment had worked and Tracey went back to work, back to riding the bike and back to fly fishing. End of story, right?

About two years later Tracey decided to have her ovaries removed as a precaution.  She had turned 40 and the chances of ovarian cancer for someone with the BRCA 1 gene are high, so removing the ovaries was the most aggressive proactive way to address it. She had the surgery and went back to her day to day life.

But about a month later Tracey felt neck pain that radiated down her arm. Given her history, she decided to go to the doctor who suggested it was most likely a bulging disc, but that they should do an MRI to confirm it. But while the MRI did in fact reveal a bulging disc, it also revealed new tumors. Multiple tumors. In all, Tracey had six growing tumors in her body. Two in her clavicle, one on her jugular vein, one on her lung, one above heart, and one in her brain. The tumors had also caused her lungs to fill with fluid. Which explained the shortness of breath she had also been experiencing but had been chalking up to simple fatigue. This time the treatment would be more challenging because these tumors could not be surgically removed. “I was really scared because I knew they couldn’t just take it out,” she remembers.

This new course of treatment would ultimately put Tracey out of work. She was lucky to have a great support network with family so close and a strong group of friends. Though she has a special place in her heart for the love and support of her parents, who never left her side. “Even though I’m an adult,” Tracey says, “Knowing I had my parents right there with me with all their love and support was especially comforting.” Yet despite how amazing everyone was or how much they jumped in to help, it couldn’t stop the bills from coming in.

“As a pre-school teacher…well, let me just say I don’t do it for the money,” she jokes, “but when my paycheck stopped coming, it wasn’t easy. The salary goes away and on top of everything else, the stress of having to pay bills kept us up at night. The bills still came.”

In sharing her stresses over money with her social worker, Tracey learned about the Joe Andruzzi Foundation and applied for a grant. Tracey says, “The Joe Andruzzi Foundation paid a full month of utilities for us. On top of the stresses of my cancer, what kept us awake at night were the bills. Knowing that was taken care of allowed us to finally get some sleep at night. It was a huge relief.”

But Tracey will also tell you that her experience with the Joe Andruzzi Foundation went far beyond bills being paid. “We were invited to their big gala event for free. So many nice people there. I got to see the goodness in humanity come out. You don’t see that part a lot with news and all negative stuff in the world, but the goodness of people we saw there actually brought us to tears.”

She was particularly impressed to hear Joe Andruzzi speak, “When I heard Joe talk, the thing that stuck out most to me was that he doesn’t have to do this. But here he is, this big strong professional football player saying what he learned from his own cancer experience was that you have to learn how to accept help. That really resonated with me.”

While Tracey is not cancer-free, things are trending in the right direction. Of the six tumors that were found, four are gone and two are shrinking. The medication she is on has less severe side effects. She says, “This time around it’s nice not to lose my hair.”

She’s not back at work yet until her immune system gets stronger. But she’s back on the bike and back on the water fishing with her husband and Rosco.

“My husband Paul has been my rock through all of this,” she says. “It’s amazing how he has taken care of me. And Rosco is with me all the time. He’s my other rock.”

As of this writing, Tracey says things are going great. Here’s to hoping that trend continues, she’s back teaching soon, and that the fish are biting. 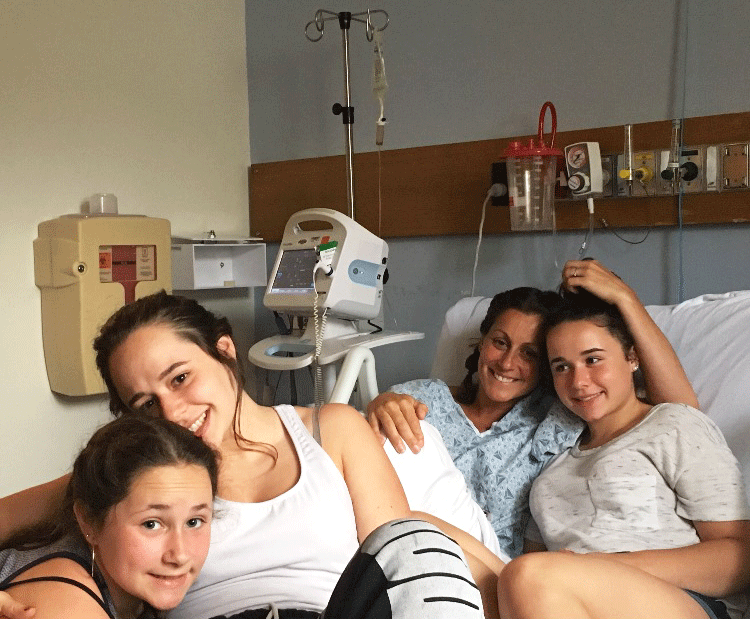 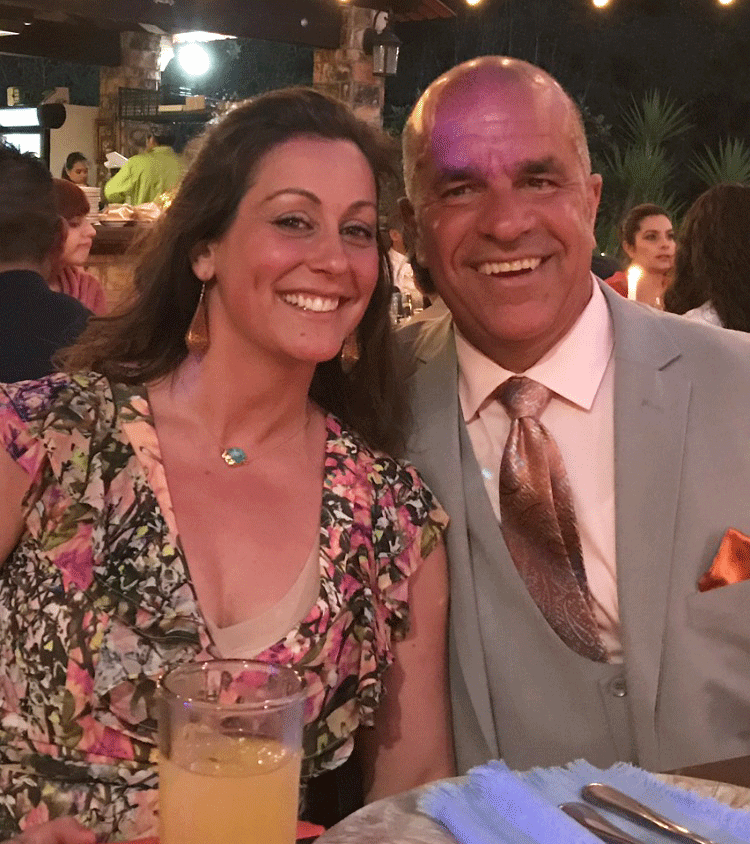