“Look back on everything that has happened, it’s pretty incredible how we ended up here.”

In the Spring of 2011, his wife, Amy – a vibrant and active mom – was diagnosed at the young age of 45 with Multiple Myeloma, an incurable blood cancer.

“It was just such a huge shock to our family,” Mike recently told the Joe Andruzzi Foundation. “No warning at all – she was very healthy, normal woman. The next few months were a blur.”

Amy and Mike had some quick decisions to make. Who is the right doctor for Amy’s type of cancer? What are the treatment options? What facility is best? “There really are not a ton of options for Multiple Myeloma specialists in Connecticut,” Mike says. “In the end, the choice was clear – Boston, and Dana Farber, had the most to offer.”

As so began a daunting stretch for the Garofalo family, including weekly two-plus hour trips to Boston, where Amy underwent “what seemed like hundreds of tests” including bone marrow biopsies, x-rays, and, as Mike remembers, “more needles taking blood than we could count”.

“Amy’s cancer didn’t require any radiation, which was the one good thing of the situation because not everyone gets that break – but she started chemotherapy right away,” Mike says. In April of 2012, after a full year of intense chemo, Amy was admitted to Brigham and Women’s Hospital for a Stem Cell Transplant.

After the transplant, Amy spent two weeks of isolation in the hospital to recover – a time that happened to coincide with the 2012 Boston Marathon.

“[Amy] remembers watching the race, seeing all the fanfare outside of her window – it really intrigued her, and piqued her interest in the marathon,” Mike says. A few weeks later, Amy was allowed to return home to the family’s Connecticut home to recover.

“In October of 2012, our families decided to start a local benefit for Amy,” Mike remembers. “The goal was to help our family cover some expenses, and it ended up being a really amazing event that raised about twenty-thousand dollars. There were close to 350 people there, live bands – just a really great day of support for Amy and us.”

Mike’s older sister, who had spearheaded organizing Amy’s benefit, had been hard at work trying to secure raffle items for the fundraiser. “She knew a guy who knew Joe [Andruzzi] from his days at Southern Connecticut State University. He knew Joe’s story about winning three Super Bowls and then his battle with cancer, and he recommended we reach out to the Joe Andruzzi Foundation [JAF] to see if they could donate something for the auction. Sure enough, JAF sent us an autographed football, which was a big hit.” 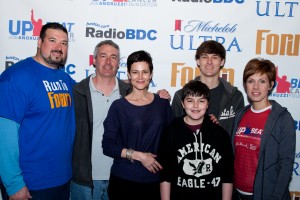 “After that, I started researching the Foundation,” Mike says. “Initially, we wanted to send a thank you – and then Amy starting reading a lot about how JAF works. We were both very touched about what the Foundation does for cancer patients, and Amy decided that she wanted to take some of the money we raised and donate it to the Foundation”.

That November, the couple drove up to JAF’s headquarters in Mansfield, Mass. and hand delivered the donation.

“We really hit it off with Jen and Joe after that, and we started attending and supporting as many Foundation events as we could,” Mike says.

One of those events happened to be the Foundation’s 2013 Boston Marathon Watch Party and Fundraiser at Forum restaurant on Boylston Street.

A year prior in April 2012, Amy was recovering from a Stem Cell Transplant, looking out her window and admiring all of the Marathon Monday athletes running through the streets of Boston. A year later, she was going to be right on the sidelines of the race with her family, cheering on the Foundation’s Team JAF runners who were raising money for cancer patients just like herself. Life had seemingly come full circle.

But, once again, life took a 180 degree turn for the Garofalo family.

In addition to cheering on Team JAF runners, Marathon Monday 2013 was supposed to be a one-year anniversary celebration of Amy’s transplant – what some patients call a “re-birthday” or “transplantaversary”. What happened would impact their lives forever, while in the process, bringing the Garofalo’s even closer to the Joe Anduzzi Foundation and its supporters. 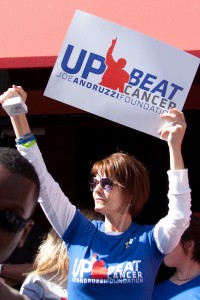 “When the first bomb went off, it shook the restaurant – I looked up the street and could see a big cloud of white smoke,” Amy recounted in the days after the bombing. “In the 10 seconds before the second blast, I thought it couldn’t be something celebratory, it was too scary. There was no way. It was so loud and so powerful,” she said.

As fate would have it, Mike and Amy’s two teenage sons were inside of Forum at the time of the blast, unharmed. The couple sustained cuts and bruises, and Mike ruptured both of his eardrums, but ultimately the Garofalo family was okay. Others at the event were not as fortunate, though, and the event itself brought JAF supporters in attendance even closer together.

“The day of the Marathon, we were right there standing next to [JAF supporters/Board Members] Anne and Chuck Furey,” Mike remembers. “In the immediate aftermath, we stayed together and looked out for each other.” Three years later, the families remain extremely close, and attend Team JAF events in cities across the Northeast, continuing to cheer on those raising funds for a cause close to their hearts.

When asked how many Joe Andruzzi Foundation events he and his wife have attended since that first experience at the 2013 Marathon, Mike Garofalo hesitates.

There was something about that last one – the historic, and beautiful, 7-mile Falmouth Road Race – that had Mike thinking about coming out of retirement.

No, not his retirement from the workforce. Rather, his 15-year absence from the world of running.

“I honestly am not a runner,” Mike humbly pleads. “I used to run in high school for a great program that was perennially State Champions, but I stopped a while ago.”

Mike was forced to “hang up” his running cleats almost two decades ago because of severe cramping issues in his calves. “From time to time,” he remembers, “I tried some treadmill stuff, but the actual training had to stop. It was just too painful.” 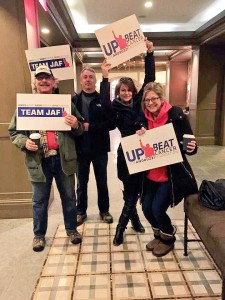 As mentioned, Mike and Amy are no strangers to Team JAF running events – the couple even attends third party fundraisers held by individual Team JAF athletes. It comes as no surprise that, eventually, Mike would be enticed to get back in the game.

“The time has come for me to put down the IPA, step off the sidewalk and do my part,” Mike wrote on his 2016 Team JAF Falmouth Road Race fundraising page. “Watching Team JAF run – especially the Boston Marathon – is incredible. I get goosebumps just watching it, and I always commented to Amy that I wish I could do it.”

“I’ve been a spectator for too long, and I wanted to do something,” he says. “I’m not sure with my injuries that the Boston Marathon is a reality, but Falmouth just seemed like such a great opportunity. I’ve loved cheering on Team JAF there in the past, and it seemed like the perfect time and opportunity to get off the sidelines.”

Training for JAF’s involvement in the upcoming Falmouth Road Race on Sunday, August 21, has been a rollercoaster for Mike.

“After high school, I had a few friends who played men’s league rugby, so I’ve been doing that for 15 years and have remained very active from a physical standpoint – but, before starting training for Falmouth, it had been years since I tried any major strenuous running,” he says. “It’s been challenging getting back into the groove, but a few weeks ago something clicked and my calves have been holding up well.”

“I’ve been slowing getting back into upping my mileage, and I have been seeing a physical therapist,” he says. “Once in a while, my calves will pop on me, and it will set me back a bit, which can be really frustrating, but I just put it in perspective and think about the reason and cause I am training for.”

“No matter what, I’m all in all. I’m feeling pretty good.”

As if you needed any other indication that Mike was committed to his Team JAF Falmouth Road Race goals, look no further than his incredible fundraising efforts. As of a week before the race, Mike is the second-highest individual fundraiser of the 58-person Team JAF Falmouth field, and is a huge part of the group’s efforts in reaching its collective $65,000 fundraising goal.

“I started out promoting my campaign through Facebook, and we have a good friend who owns a restaurant [Mondo] near our home who was nice enough to let us host a fundraiser, and he donated a piece of the proceeds,” he says. “I hit my fundraising goal a few weeks ago, but honestly, I’m never satisfied – I’m going to keep raising money, and spreading JAF’s mission – until it’s time to run the race.”

One of the most prominent sentiments within the Joe Andruzzi Foundation’s mission is the belief in the power of “paying it forward”. When cancer ended Joe Andruzzi’s football career, he was fortunate to be able to afford his own treatment expenses, but the experience opened his eyes to the plights of families struggling to pay bills while out of work, battling cancer. From there, the Foundation was born, and the “pay-it-forward” mantra has lived on.

You would be challenged to find better representations of that mantra than Mike and Amy Garofalo. Here was a family suddenly struck by cancer’s impact, endured a year of treatment, and then donated proceeds from their own fundraiser towards a cause they believed it. Struck by the Foundation’s mission, Mike and Amy have dedicated countless hours, resources, and finances to JAF in support of patients like Amy.

More than four years after receiving something as simple as an autographed football from the Foundation to raffle-off at a fundraiser, Amy’s cancer is stable – and even though she must continue on chemotherapy, she has chosen to live life to the fullest.

Just another example of how the power of positivity and generosity can be far more contagious than any sickness or disease that threaten our bodies – the mind is far more powerful, and the Joe Andruzzi Foundation is incredibly fortunate to have supporters like Mike and Amy Garofalo in our corner.

To donate to Mike, or any member of Team JAF’s Falmouth Road Race team before next weekend’s race, visit: http://bit.ly/2bnxA14.