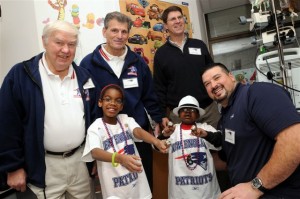 I’m sure much of New England is still recovering from this year’s Super Bowl, and as someone who was lucky enough to win three rings with the Patriots, you know I felt the pain.

But I had two Super Bowl experiences this year that softened the blow and reminded me that sports can be about so much more than winning and losing… they can provide much-needed fun, camaraderie and caring to people fighting for their lives. Which puts it all in a very different perspective.

A few days before the Pats and Giants faced off in Indiana, I joined ten fellow former Patriots on a truly heart-warming visit to Children’s Hospital in Boston. Our crew included Pete Brock, Bob Cappadona, Matt Chatham, Ed Ellis, Ilija Jarostchuk, Steve King, Bill Matthews, Len St. Jean, Brent Williams and Tom Yewcic. We all split up and visited different floors of the hospital, as the kids couldn’t all attend one party, due to the risk of infections.

Kids decked out in Pats gear had a blast checking out our Super Bowl rings and getting autographs and pictures. Brent even got dancing lessons from a young female patient, though I’m not sure ballet is his forte. For these seriously ill, amazing kids, smiles and a little silliness go a long way. Just hanging out with them is a real joy.

My excitement for the upcoming Super Bowl really kicked in when I traveled with my father and brother Jimmy – along with a few dozen of his fellow New York City firefighters – to the Bethesda Military Medical Center in Maryland. Actor Jon Voight, active in veterans’ causes and a friend of one of the firefighters, joined us too. This is the third year I’ve trekked to Bethesda to watch the big game with wounded vets and it’s always inspiring.

This year, we went straight to visit Army Cpl. Adam Keys, who we met at last year’s party. Keys is an intensely brave young soldier who lost both legs and his left hand in 2010, when a roadside bomb decimated his truck in southern Afghanistan. He was the vehicle’s sole survivor; four men died, including his best friend.

Keys was surprised to see us and extremely touched to receive the gift we brought him: an autographed jersey from Patriots center Dan Koppen – a classmate of Keys’ at Whitehall High School in Pennsylvania. It was so cool to do something meaningful and special for this young man, who has survived so much.

Super Bowl Sunday was a mass of excitement and activity at the medical center. We started our day visiting soldiers who weren’t mobile enough to attend the big party. It was so gratifying to see their huge smiles, as they tried on my Super Bowl rings, got autographs and posed for pictures. They were also deeply appreciative of the donated goods we brought from Reebok and Avon, and our ever-popular NYC Fire Department T-shirts. It’s so humbling to see how much these men treasure even the smallest gifts.

The big party was chaos… but good chaos! About 350 people turned out for autographs and pictures, tables of food and the game, which played on a huge projected screen and flat screens around the room. I went through a big stack of pictures and was blinded by flash bulbs, but it was all worth it.

The craziness died down by half-time and we all got down to the serious business of watching football. There were even a few Pats fans in the house, but we were far outnumbered. Despite New England’s heart-breaking loss, it was a fantastic game and both sides played well.

Visiting these vets took me back to my own time in the hospital and my heart goes out to them. I know recovery happens one day at a time, and progress can be slow. Those hospital walls can feel like they’re closing in and you have to strive to get better and follow your doctors’ advice.

I was happy to see many family members and friends at the hospital, supporting these heroes. I know my family’s love made all the difference in my own treatment. I hope we gave these men some happy memories that will transcend the day – and the game – and help sustain them as they work to recover in the months to come. 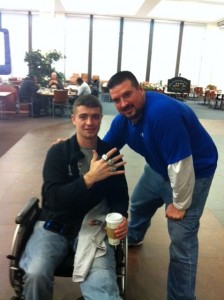