Abigail Archer’s cancer came the way so many do: out of the blue, with no warning.

During a regular breast exam, her gynecologist felt something odd. “She said ‘I don’t like the feel of this, why don’t you go get a mammogram?’” Abigail remembered. “Thank God she suggested it.”

It was the beginning of a long journey through treatment; she was 36 years old and it was March of 2016. “I was super resistant in the beginning,” she admitted. “I thought, this can’t be cancer.”

But test results kept forking towards bad news, she said. It turned out she had ductile carcinoma, “triple positive” for progesterone, estrogen and the protein HER2.

At first, Abigail thought she could just have a lumpectomy. This was a relief, as she had a demanding job as an extension agent (a scientist and biologist) for Barnstable County. Summer was coming to the Cape – the best and busiest time of year.

She was looking forward to working with the shellfish wardens and fishermen, educating the community on all the latest in marine research.

But cancer meant taking summer off. Because it was in her ducts, she needed a mastectomy. A second surgery followed when tests showed surgeons had not removed it all.

Her co-workers donated sick time to her, and she was able to receive full pay while she recovered from surgery and underwent chemotherapy and physical therapy.

She was grateful the first part of her treatment took place at Faulkner Hospital in Jamaica Plain, overlooking the Arboretum. “Being able to look at bright green trees from the hospital bed absolutely helped,” she said.

Over the next year she would undergo chemotherapy treatments every three weeks with Dana Farber doctors at South Shore Hospital in Weymouth. There, she was asked to participate in a trial for a new drug, T-DM1. She jumped at the chance.

“I’m a scientist,” she said. “I thought it would make it mentally a little easier for me, if I could contribute to the data.”

Her side effects were not bad, she said. She felt only a little nausea and was mostly just tired. And she never lost her hair, though she was ready.

“I was ready to wear multi-colored wigs, I had scarves, I had hats,” she said, laughing. “But it didn’t happen.”

Traveling from Brewster to Weymouth was a challenge, she said. Throughout her long treatment, her husband, friends and acquaintances took turns driving her.

She finished her chemo in September 2017 and will be followed through the trial for five years. She has blood work every six months. She’ll also have reconstructive surgery when she feels she’s at full strength.

“My body has healed really well,” Abigail said – something she attributes to being in good shape through running and dancing. When she got her diagnosis, she had just finished a Couch to 5K run.

She also regularly dances jazz and tap, and even performs with her studio. In May, she danced in the annual recital. “It was so much fun to just be up there, wearing sequins, dancing and being happy.”

Abigail is just now coming into the “mentally processing phase,” where she can start to put her cancer into perspective.

For the longest, she treated herself like another project to manage. She did her research and made choices. She delegated to friends and acquaintances, who provided meals and rides. She gratefully accepted help, receiving gas cards from the hospital and allowing JAF to pay a high electric bill.

Her advice to others? “Find someone who’s been through this before.” In Abigail’s case, her best friend had cancer the previous year, and her friend’s cousin the year before. Their experience was invaluable. She also advocates for early screenings and faithfully following the physical therapist’s instructions.

This summer, Abigail just wants “normal.” She can’t wait to swim on the Cape, something she’s missed for the past two years.

At her birthday in June, she said, “I want to be with my husband and my brother and my parents, eating strawberry shortcake.” 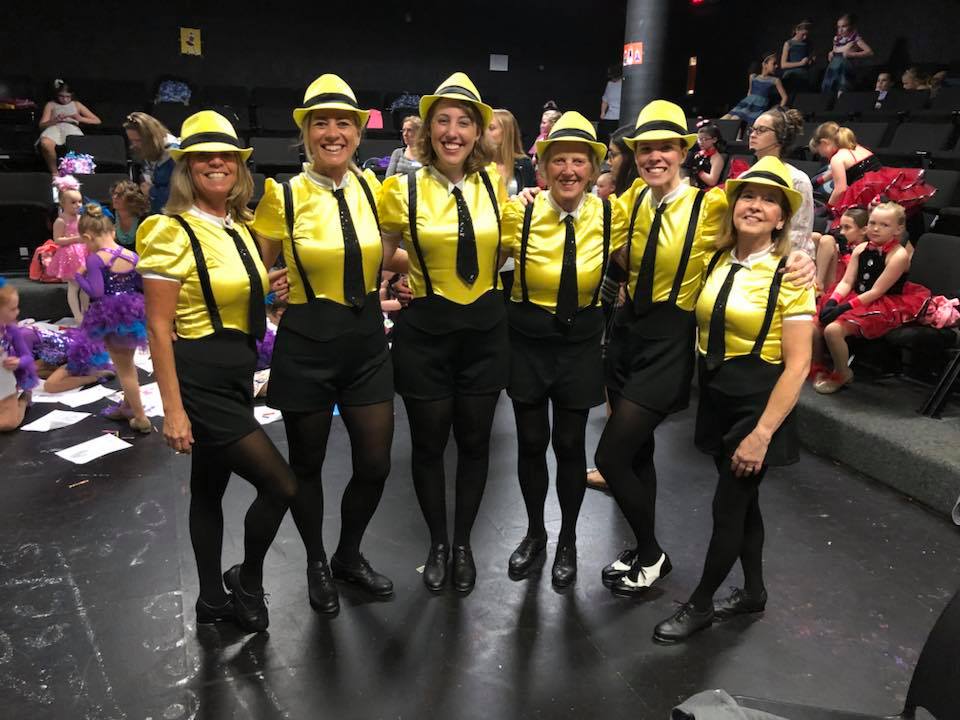 Abigail and friends at the annual dance recital