Skip to content
In recognition of Memorial Day, I’d like to talk about a special friend of the Joe Andruzzi Foundation: Eric Kelly.
Eric is a 23-year-old U.S. Marine from Mansfield who truly knows the meaning of this holiday, having lost five friends when his platoon was stationed in Afghanistan in 2010. He survived a brutal seven-month deployment, in which 30 percent of his squad – the 2nd Battalion 6th Marine Regiment Echo Co. out of Camp Lejeune, N.C.  – was wounded. Then he came home and found out he had cancer.
I got to know Eric last fall, as he was starting treatment for stage 3 Rhabdomyosarcoma at Dana-Farber. I was lucky to connect with his father and visit him at home, where we talked Patriots, the military and cancer – topics of common interest. (As many of you know, veterans and military causes are close to my heart.) I was proud to give him a Pats jersey and photo to cheer him during treatment, and invite him to our annual Joe Andruzzi Foundation gala, which he was able to attend before he got too sick.
Eric is an extraordinary young man, full of strength, personality, intelligence and humor.
When he first noticed strange signs of illness after returning from Afghanistan – a lump growing out of his neck, a teary left eye, a drooping face and terrible headaches – military doctors told him he had conjunctivitis. But “I had conjunctivitis as a kid,” Eric said. “It doesn’t make a lump grow out of your neck.” He pushed for better care and more opinions, and on a family visit to Massachusetts, got a biopsy at Faulkner Hospital. That’s when he learned the truth. “I just broke down in tears, I had already been through so much,” he remembered.
It was a serious blow to his family, who had already weathered his older brother’s deployment with the Marines in Iraq, as well as Eric’s in Afghanistan. At one point, they even mistakenly thought his brother had been killed in action.
After his diagnosis, Eric was angry, but he quickly embraced his new battle; he went back to his doctors determined to survive cancer, as he’d already survived combat: with bravery, dignity and grit. An intense six-week radiation regimen and months of chemotherapy followed.
It was a rough go. Eric said he couldn’t eat for six months, except through a tube, and he still craves Buffalo Chicken pizza (which is too spicy). He suffered sores on his eyes and in his mouth and infections during treatment. He slept all day for months, and just started to feel like himself again in March. But his last chemo treatment is scheduled for July 16. And today, his scans show no signs of cancer!
Adam Rand, a friend of the Foundation, donated a donated battery-operated Polaris bike for the live auction at our annual New England Celebrities Tackle Cancer gala. Upon hearing Eric’s story, he ended up bidding on the bike himself so that he could gift it to this courageous young soldier. Now that he’s finally feeling better and has received a clean bill of health, I hope it will help raise his spirits and give him something fun to scoot around on as the weather gets nice.
I feel so lucky to have met this amazing young Marine through our Foundation’s work, and I’m proud of the progress he’s made in his cancer fight. Now awaiting a medical discharge, Eric wants to go back to school and pursue nursing.  “If I could ever get into the oncology field and help kids with cancer, that would be awesome,” he said.
We think so too.
Thank you, Eric, for your service, inspiration and desire to give back
– Joe Andruzzi 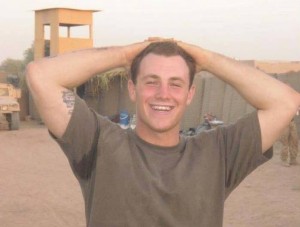