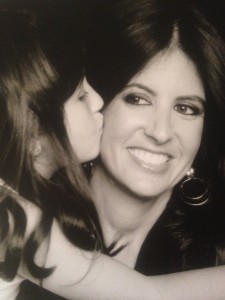 We’re so grateful to have this amazing volunteer runner on our team – Carrie Zimerman, a 35-year-old mom and registered nurse. Carrie’s coming to us from sunny Newport Beach, California, where she reports cold-weather training has not been an issue! (She also offers, hand-down, the best tips of any team member so far.)

Thanks for joining us, Carrie, and bringing your awesome energy, experience and commitment to our cause.

JAF: What is your inspiration?
Carrie: So hard to answer this question. I find so many things inspiring – other runners and their stories, runners who are able to overcome physical disadvantages, my amazing daughter, my dad.

JAF: Have you ever run a marathon before?
Carrie: I ran the NYC marathon in November of 2010. I had an idea that I wanted to run all five major world marathons. But just in case one seemed like enough, I wanted to run in the city that I grew up in and around. I left a big piece of my life behind when I left New York seven years ago, but it is still a part of me. I also ran the Chicago Marathon in October of 2011. I had major health problems during the training and race and was just happy I crossed the finish line. I loved Chicago and the experience and hope to run it again, later on down the line.

JAF: What advice would you offer other marathon runners?
Carrie: Start slow and negative split if you feel good after the half-way point. Don’t forget to eat/drink during the race, but don’t overdo it either. Take salt stick. Bring music for the “middle miles,” but don’t drown out the marathon experience. It really is a show. Be prepared for the blues afterwards. There is so much anticipation and build-up that afterwards, it can be tough. Wear glide. Everywhere. Wear nip guards. Don’t walk unless you are dying, your muscles will just cramp up more. Listen to your body. SMILE – especially at cameramen and small children. Never underestimate the power of a high-five…or a tissue from a complete stranger. I think I got some of this from a book. But it’s all true!

JAF: What do you like about running?
Carrie: It just makes me feel awesome. I have learned so much about the trails and nature around my area. I have begun to really appreciate the beauty of the outdoors. I have met so many new fantastic people through this journey. I have met myself. Running clears my cluttered mind and frees my endorphins.

JAF: How’s training going?
Carrie: Training is going well. Some weeks are harder than others, but I have a great friend who has been there with me, even through my longest runs, despite the fact that she is not even running a marathon. I feel like I am accountable to her and it helps me stay on-track. I generally run speed (hills/track) on Tuesday. Tempo runs Thursday and easy runs Wednesday and Friday. Long runs are Sunday. The other days are reserved for cross training or rest. Sometimes, I throw in an extra run for good measure, but I have a schedule (created by a running coach) and I generally stick to what I am told to do.

JAF: How do you motivate yourself to train when it’s freezing cold or snowing?
Carrie: Thankfully, I haven’t had this issue so much. I wear gloves or a beanie when it’s chilly here, but it hasn’t been much colder than the 50s and 60s, which is actually perfect for running.

JAF: What music pumps you up?
Carrie: I listen to everything from the soundtrack to Rocky to hip hop to instrumentals like “Children,” by Robert Miles. Favorites lately are “Little Bad Girl” by David Guetta and “C’mon” by Tiesto vs Diplo. I find that music can definitely speed you up or slow you down.

JAF: What’s your marathon goal?
Carrie: I would LOVE to PR (achieve a personal record). And feel strong during the entire race. I hate putting a number on the time, but I definitely have a time goal. I am a bit afraid to put in on paper right now…
JAF: What are you doing to fundraise?
Carrie: So far, just lots of emails and Facebook. I also hosted a cocktail party, and though attendance wasn’t as strong as I had hoped, it was great getting the word out to everyone about the foundation. There were people at the venue not attached to the party and I was able to tell them all about JAF.

JAF: Do you do other charity work?
Carrie: Yes, I work with a group called the CHOC Glass Slipper Guild (CHOC is Children’s Hospital of Orange County). We are a women’s philanthropy group that raises money to support the neurosciences division of the hospital, and now the construction of the new hospital tower. A friend initially invited me to join the group, and since the time commitment is really only heavy during its annual gala, I decided it might be a nice idea to give back to the community. Since I am a pediatric nurse and know many children who have rotated through CHOC, it is something that I really enjoy being a part of.

JAF: What else should we know about you?
Carrie: Cancer has had a huge impact on me and my family. My mom battled cancer for years in her early 30’s, and my dad in his 50’s – he lost his battle at 59. No one thinks they will be the person affected by this horrible disease. It truly is debilitating, in every sense of the word. My family was so fortunate to have plentiful resources – physically, emotionally and financially. But for those who don’t, foundations such as this as SO vital. This is so much more than being able to run the Boston Marathon for me, and I am thrilled to be a part of it, even if I am several thousand miles away.