For Team JAF runner Melissa Frontino, her return to the Boston Marathon is deeply personal. Not only was her Marathon cut short by just one mile last year, but also her goal of crossing the finish line in honor of her late cousin, Lucy, who passed away from ovarian cancer.

Although—in the true (Up)Beat spirit—Team JAF returned to complete the race a few weeks after the bombings last year, it is important for Melissa to finish what she started one year ago.

She also hopes to exceed her fundraising goal for the second year in a row to help our cause and spread JAF’s mission, and we can’t wait to cheer her on as she crosses the finish line in April. 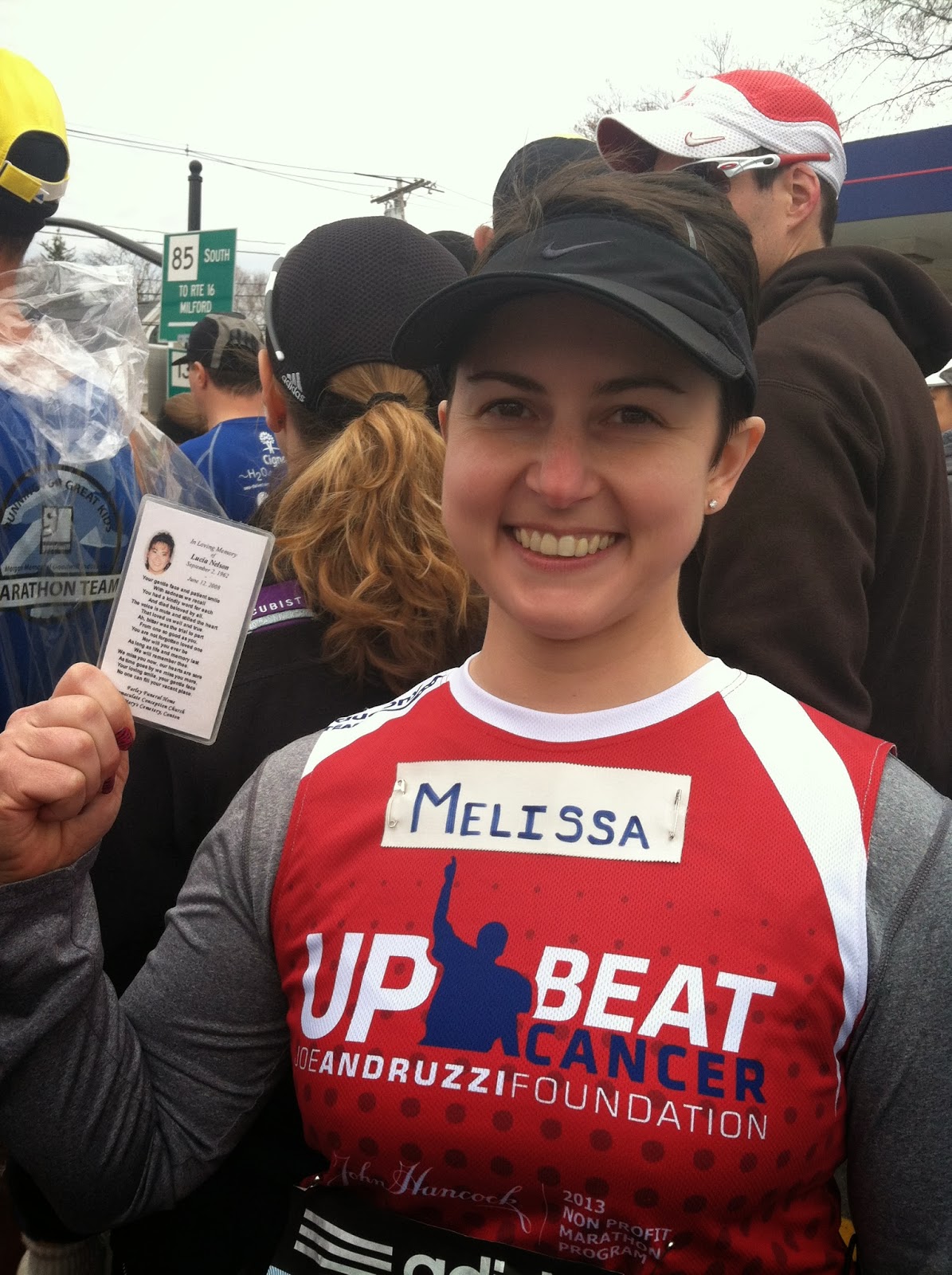 JAF: What inspired you to return for the Joe Andruzzi Foundation Marathon Team this year? How did you originally find out about Team JAF?
Melissa: I originally found out about the foundation through Rich DeSilva, who had run the marathon with JAF in 2012. Once I heard about their mission, I knew it was the right charity for me to support as well. There was really only one deciding factor when I decided to run again this year—I needed to finish what I started. Although I received deferred entry, I still knew I would use the opportunity to raise money for JAF once again.

JAF: What was it like being part of the 2013 Team JAF Boston Marathon team? Any inspiring stories you’d like to share?
Melissa: If it wasn’t for the camaraderie and support from the entire JAF team, the 2013 Marathon would not have been nearly as great an experience. Two of my fondest memories are of the Saturday night before the race when the team went to Forum for the carbo-load dinner. Afterwards, we all went down to the finish line to have our pictures taken. There was so much excitement and anticipation and happiness associated with that night.  We had all been running in the cold together for months, sometimes in super hero costumes, and had really built up some great friendships along the way.

Sadly, I didn’t get to cross the line that Monday, but I did get to cross it about a week later with my team. About 16 of us got together and finished the last mile. It had started out as a small thing, but once Joe and Jen heard about it they were amazing in their support. They arranged for us to get a ride to the 25 mile marker (give or take) and were there to meet us at the finish line with our families. It really helped us all to bring some closure to the 2013 Boston Marathon.

JAF: What’s your marathon fundraising goal? How do you plan on reaching that goal? How does it differ from 2013?
Melissa: I am looking to raise $5,000 this year. It is the same goal I had last year and, like last year, I hope to beat it again.

JAF: How’s training going? What is your regimen?
Melissa: So far the training is going well. I’ve been more focused on injury prevention, since I had an injury from the training last year, but overall it’s going great – even if it has been A LOT colder this year!

JAF: What are you doing to fundraise this year?
Melissa: I raise the money through fun things like a Super Bowl Squares fundraiser and from the generosity of my friends and family who I remind often about the marathon.

JAF: Anything else you’d like our supporters to know about you or your family heading into the 2014 Marathon season?
Melissa: This year’s marathon means so much more than any other marathon I’ve run and I am proud to be able to be part of Team JAF once again!