Today, we kick off our blog series highlighting the 2013 Joe Andruzzi Foundation Boston Marathon Team with a profile on one of our special volunteer runners. People run with our team for deeply personal reasons. Some are cancer survivors celebrating their health. Some are honoring sick family members and friends – living and gone. And some simply support our cause, and want to help our families and patients. We are grateful for them all. And to all those who can donate.

In our first profile, meet JAF Marathon Team member Stephen Pecevich, a truly special dad running for his 8-year-old disabled daughter, Sydni. He’s traversed a challenging and inspiring “road less traveled,” and we’re honored to share his story.
Stephen Pecevich instinctively knew something was wrong with his baby.
It was only a slight indentation above her eyebrows, a small swelling that made her head seem larger. But nonetheless, it bothered him. Baby Sydni had just undergone her one-month check-up. Her doctor said her head size was normal, comparable to her older sister’s at the same age. But a week later, Stephen thought her head looked even bigger. He insisted on a closer examination, which led to a CT scan. And his family’s life changed forever. 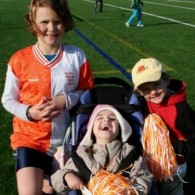 On Jan. 14, 2005, doctors found an enormous cancerous mass in little Sydni’s head – the biggest brain tumor Boston Children’s Hospital had seen in a two-month-old baby, her doctor told her parents. It was dangerously situated inside the ventricles on the right side of her brain, and it had “tentacles that seemed to reach out in every direction,” he wrote, in a daily diary he kept for family members and supporters after Sydni was diagnosed. “The very thought still sends chills down my spine.”
A grueling 12-hour tumor removal surgery took place the next day – an agonizing ordeal that Stephen describes as the worst day of his life. Hours in, Sydni’s doctors advised her family to call their priest. She was not expected to live. But somehow, the baby fought through.
And Stephen’s “angel on earth” continued to fight for the next eight years, through surgeries and seizures, life-threatening illnesses and permanent disability, defying everyone’s expectations. After her first surgery, Stephen remembers, “the entire hospital was talking about the miracle baby in ICU.” They’re still talking!
Stephen was not a marathon runner before Sydni. He became one because of her. One day in March 2005, a few months after her initial surgery, Sydni’s chances looked bleak, as they would many times thereafter. She wasn’t expected to survive the night.
“I whispered in her ear and promised my daughter that if she would just give me an opportunity to be a father … to be a loving Dad to her … I vowed before God to love her, no matter where the fates may take us,” Stephen wrote. “If need be, I would be her legs to walk, her eyes to see and her hands to eat.” Sydni kept fighting. And Stephen began running in her honor.
This year’s Boston Marathon will be the 16th marathon in the past eight years for the 49-year-old Quincy dad, who serves as executive director of a nonprofit that helps the families of our nation’s service members and wounded warriors; since 2005, he’s run marathons in New York, Chicago, Minnesota, Nashville, Toronto and Hartford, among others. He aims to raise $8,000 for the Joe Andruzzi Foundation this year, to help families like his own.
Sydni will never walk, talk or eat, other than through her feeding tube. She expresses herself through her eyes, laughter, smiles and moans, her dad says. Terrifying episodes alight without warning. Just a few weeks ago, she went from laughing and smiling to enduring a brutal Grand Mal seizure, pneumonia, flu and emergency brain surgery – all within six days. Her health is unpredictable, and Stephen said he’s been given so many discouraging diagnosis that “I don’t even ask anymore.” Still, Sydni fights on.
“The trick to coping is to find hope in the darkest of days, and to remain focused during the brightest ones,” he says. “When you focus on your blessings, God makes sure that you are always blessed in abundance.”
For Stephen, Sydni is an angel who has taught him strength in weakness, and joy in heartache. She inspires his running, and also his prolific writing, poetry and even songwriting. His faith and love for Sydni – and for his 10-year-old daughter Tari and 6-year-old son Tristan – fuels his courage down the “frightful roads less traveled,” he says.
He has a mental model that helps, he explains. Between Point A (what is) and Point B (what may or may not be), there’s an “anxiety gap.”
“I don’t allow myself to fill in that gap with worry,” he says. “Every moment I’m with my kids, I try to appreciate them fully. Life is all about embracing the detours. The journey is truly the reward.”

Stephen is looking forward to Marathon Day on April 15th – another chance to be Sydni’s legs.