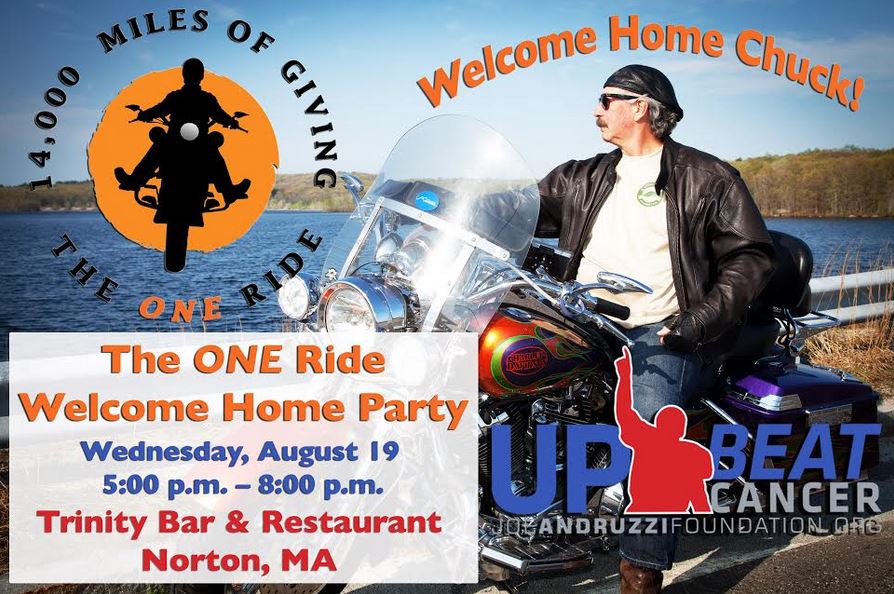 Our Foundation has always believed in the power of “paying it forward” – a slogan Joe has preached since his playing days with the Patriots, when he would spend time visiting hospitals or participating in community fundraisers. It was that mantra, in part, that led us to start the Joe Andruzzi Foundation and give back to those less fortunate.

Over the years, we’ve been blessed by an incredible supporter base, and it’s amazing to see how many of our backers believe in our mission.

It’s hard to find a better example of this than Chuck Furey – a long time supporter of our foundation, husband of one a JAF board members (Anne Furey), and father of our events manager (Gillian Furey).

Simply put: Chuck has been there since the start of JAF – volunteering at events, backing our cause, spreading our (Up)Beat mantra.

On April 15, 2013, Chuck, as always, was supporting JAF by attending our team’s Boston Marathon Watch Party & Fundraiser at Forum Restaurant – cheering on our runners as they took their final strides down Boylston Street towards the finish line. Just moments after the second bomb exploded, Chuck rushed onto the patio, looking for his family amongst the hysteria.

What happened next, after finding Anne and Gillian, was a frantic attempt to help those who were injured; the placing of a tourniquet on a young man’s leg, finding scattered couch cushions to elevate an injured foot, watching as EMTs, physicians and firefighters tended to the severely wounded…all while feeling the loss and surreal confusion of the attack.

In an instant, Chuck Furey, a husband, father of two, Eagle Scout, and 33-year veteran of the pharmaceutical industry specializing in oncology, had also become a survivor of the Boston Marathon bombing.

As the days and weeks and months went by, Boston came together as a city, a community and a nation. Knowing the importance of local charity work first hand, Chuck had a newfound appreciation for how the act of charitable giving spans beyond one’s backyard – and he knew he wanted to get involved on a larger scale.

And with that, Chuck created The ONE Ride – a 14,000-mile solo charity motorcycle ride touching all four farthest points in the Continental United States. Chuck selected five foundations across the country to share equally in all of the charitable proceeds, including the Joe Andruzzi Foundation, the American Indian Cancer Foundation in Minneapolis, BASE Camp Children’s Cancer Foundation in Winter Park, Fla., Gilda’s Club Seattle in Seattle, and Green Beret Foundation in San Antonio, Texas.

With 14,000 miles of open road in front of him, Chuck Furey, 62, set out on his charity ride on June 9 – aimed at recreating a sense of national philanthropy with a peer to peer fundraising campaign spanning 70 days riding his Harley-Davidson, affectionately named “Purple Haze.”

Just over two months later, Chuck is finishing his journey – and we want you to help us welcome him home.

Tickets are $25 and can be purchased online (here), which includes access to the event, appetizers, beer specials sponsored by Bud Light, and a live concert performance by musician Matt Thomas – with a portion of all proceeds benefiting JAF through the The ONE Ride.

The event will be the perfect way to celebrate Chuck’s incredible fundraising campaign, and we hope you will join us in welcoming him home after the journey of a lifetime.