I didn’t really understand how big of a deal it was until I needed it. When you’re healthy and working you never think that you might not be able to pay a bill. Then it happens.

Having your first child is about as big a life changing event as it gets. When you walk out of the hospital carrying a newborn and you realize no one is coming with you, that’s when it really hits: you’re on your own to figure this out.

That’s how Amy Deveau felt while driving home from the hospital with her husband, Michael, their newborn, Millie, and a car full of flowers and balloons. She couldn’t help but wonder if they were ready for this. She was already exhausted from a difficult childbirth, and as joyful as it felt when she looked at Millie, she couldn’t help but wonder how they were going to handle it.

The truth is, she had no idea what was coming (or how bad it was going to get).

The first few months of adapting to life with a newborn were difficult. With her husband working and Amy home full time with Millie, but also job hunting, there was so much to do, and she was wiped out. But she chalked her fatigue up to “new mom exhaustion”.

Then she developed tendonitis in her thumb and hand. When it advanced to her arm to the point where she couldn’t straighten it, she was sent for occupational therapy but it wasn’t making any difference. After more tests she was told she had blood clots in her arm. She stopped OT and was given blood thinners. Amy considered the issue addressed.

But she didn’t wind up getting better. She got worse.

The day before Thanksgiving 2017 was the first time Amy felt something bigger might be wrong. She was so exhausted she could hardly stand up, and when she did she saw stars to the point of almost passing out. She was constantly nauseous and short of breath, huffing and puffing as though she has just taken a jog. Her husband finally convinced her to call the doctor, but the doctor said there wasn’t much he could do over the phone and told her to get to the emergency room.

Unfortunately, that trip to the ER didn’t make things any clearer.

The hospital ran a number of tests. They took blood. Then they took blood again because her results were so off they thought there was a mistake. There wasn’t. Ultimately, they told Amy they didn’t know what was wrong with her and that it was beyond their scope to even diagnose her, so they transferred her via ambulance to another hospital. The doctors there recommended a bone marrow biopsy.

Even at this point, while Amy was waiting with her husband, she still believed someone would tell her what was going on, give her a prescription, and send her on her way.

Then the doctor came in. The first words out of the doctor’s mouth were “With this type of leukemia…”, and Amy’s mind went blank.

She heard nothing after that. She just remembers that both she and her husband cried. They didn’t even hear the last half of the sentence where the doctor told them it was curable with treatment. Curable, but not easy.

Amy was immediately admitted to the hospital for what would become a month long stay to receive her first round of treatment. She would go on to have eight months of treatment after being released.

It was a lot to take in. Add to that the life changing event of just having had a baby, and Amy and her husband were quickly overwhelmed.
They were lucky that Michael was granted a leave of absence from work. Friends and family also helped as they could with scheduling and child care so Amy could get to her treatments. It was a chaotic time, but somehow, a manageable one, despite the rigor of the treatment schedule.

But the bills kept coming in, and along with the new expenses of caring for a newborn, things got stressful in a hurry. 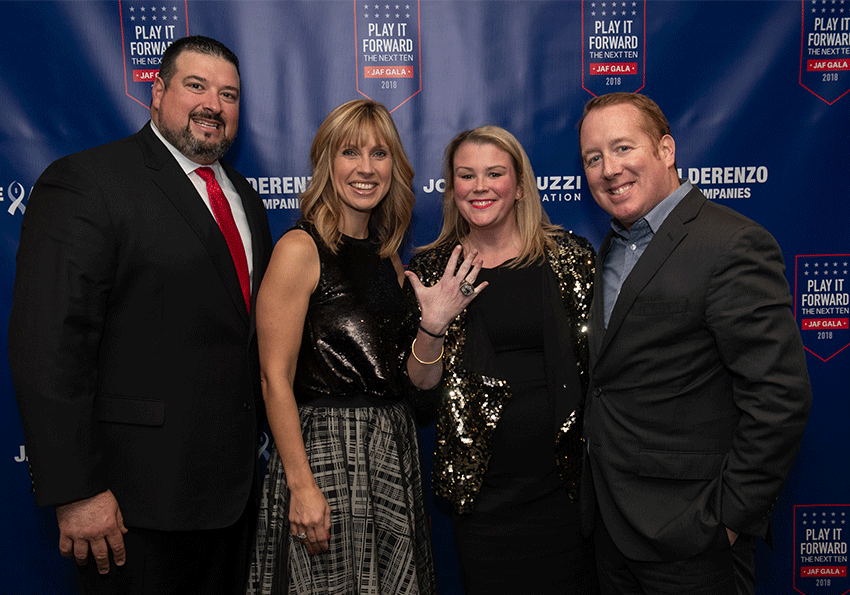 While Amy was in the hospital, a social worker had mentioned that the Joe Andruzzi Foundation assists patients in Amy’s situation and helped her submit a grant application. Not long after that, a car payment, an insurance payment and cell phone bills were paid.

“It might seem like a small thing”, Amy says. “But it was a big thing to us. Anything at that time that could reduce the stress level was huge.”

“[JAF] does tremendous work. I didn’t really understand how big of a deal it was until I needed it. When you’re healthy and working you never think that you might not be able to pay a bill. Then it happens. They make a huge difference for people like me. They keep the lights on. They take the weight off.”

Today, Amy has completed all her treatment and is now in remission. She expects to start a new job soon.

She’s also able to finally embrace the joys of being a new mom. She’s back to feeling 100%, happily trying to keep up with an energetic 17-month-old.

To call it a trying year would be a massive understatement Amy says, but she’s happy it’s behind her. “Our baby won’t remember a thing about this past last year, but her father and I sure will.”