Our Foundation is excited to welcome another first-time marathoner to Team JAF this season: 26-year-old Mark Zurlo, who works in Alliance Marketing at EMC in Hopkinton. We’re proud this former Bentley University triple-jumper has overcome multiple knee surgeries to join us on the course this year, and we’re truly touched by his commitment to the families we serve.

Keep up the awesome work, Mark. We’ll see you at the finish line!

JAF: What inspired you to run for JAF this year?
Mark: After recovering from multiple knee surgeries, I was able to get back into running about a year ago. As I increased my mileage, I decided to register for a half marathon in April. After two months of hard training, I was very happy with the result and decided it was time to take on the challenge of running a full marathon. Being very injury-prone and not knowing how many marathons I might have in me, I decided to make my first marathon a big one. And there is no bigger race than the Boston Marathon. When choosing which charity to represent in the race, I was immediately struck by the mission of the Joe Andruzzi Foundation. Unlike many of the larger cancer charities that focus on research, I liked the fact that JAF directly helps the individual affected by cancer, providing financial and emotional support when it is most needed.

JAF: What’s your fundraising goal and how are you meeting it?
Mark: My marathon fundraising goal is to surpass the minimum requirement by as much as possible. I have received donations from friends, family and co-workers, and I have also planned events, including a 50/50 fundraiser at Improv Asylum in Boston and a yoga fundraiser at Bikram Yoga Waverly in Waltham we held on March 3rd. I have used Facebook and Twitter to get the word out about my fundraising efforts, and I have also used my marketing skills to design business cards and flyers to hand out and post around the office. To make my fundraising site easier to get to, I purchased the domain name www.mzmarathon.com, which redirects visitors to my fundraising site. 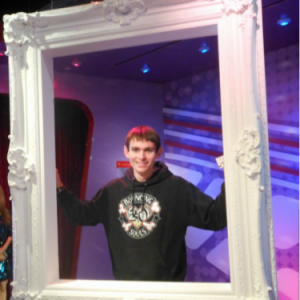 JAF: How do you train?
Mark: I suffered from foot problems and an Achilles injury early in training, but I have worked extensively with the team PT to get as healthy as possible. I am currently still nursing the Achilles strain, but I have been able to get in all of my Saturday long runs and at least two other runs during the week. I have spent more time on the bike in the gym than I would have liked, but I think it has helped me stay in good running shape. I have also attended Bikram Yoga at least twice a week, which helps relieve some of the soreness and prevent other injuries.

JAF: How do you stay motivated to train in winter?
Mark: The cold and snowy Saturday long runs have been a challenge and an adventure at the same time. I ran 12 miles in 13 degree temperatures, and when I finished, it felt like a huge accomplishment. During the week I usually run indoors on the treadmill.

JAF: Do you do other charity work?
Mark: I have worked with a number of charities in the past, and I felt like this was the next step in my community service involvement. The charity work I am most proud of occurred at work, where I helped create a program call “EMC Marketing Gives Back.” I helped run the first installment of the program, “EMC Fights Hunger,” which benefited the Greater Boston Food Bank and other food banks around the world. Over a five-week period, employees donated 40,000 pounds worth of food and volunteered more than 400 hours at local food banks. “EMC Marketing Gives Back” has become a sustainable program that has benefited organizations such as Charity: Water and Cradles to Crayons in more recent editions.

JAF: Give us a good race story!
Mark: In my first (and only) triathlon last summer, I had to backstroke the entire swim and tried to make up time during the bike ride. After charging as hard as I could for 16 miles, I missed the turn off and did an extra 8 mile loop. Needless to say, my time was not very impressive.

JAF: Got a theme song?
Mark: I am a huge music fan, so it’s very difficult to pick just one. But I love running to “Detroit” by the band Fireworks. It’s very upbeat, very fast, and has many references to sidewalks.

JAF: Who’s your favorite superhero? Any costumes in your closet?
Mark: I would have to go with Captain America here. You can’t beat the unapologetic patriotism and inspiring story of a scrawny kid who grew up to save the country. I suppose I would run in this costume, since it isn’t too intrusive, minus the shield, of course.

JAF: How do you stay “upbeat” and motivated?
Mark: It’s not difficult to stay motivated when you have an opportunity to run in a race like the Boston Marathon. I’ve attended the race as a spectator for years, and I know how difficult it can be, but I also know how rewarding it would be to perform well. Representing the Joe Andruzzi Foundation and everyone it has assisted, as well as everyone who has supported me in helping to run the race, is a great responsibility and an honor.

JAF: What would surprise non-runners about marathons?
Mark: It’s so much easier when you do it as part of a group.

JAF: Runner’s high… myth or reality?
Mark: I do some type of physical activity almost every day. On days that I’m not able to make it outside or to the gym, I feel awful. So I’m going to have to say it’s real.

JAF: What’s the best training snack?
Mark: Peanut butter and jelly before the run. Cliff Shots during a run, because they taste like gummy bears. And chocolate milk or orange juice after a run.