Small problems aren’t as important as they used to be.

In May of 2017, Charmine Duest got two pieces of shocking news.

First, the lump she’d found in her left breast was cancerous. Second, she was about eight weeks pregnant.

“It was kind of a shock to me because there’s no history of breast cancer in my family,” said the North Attleboro, Massachusetts mom and dental assistant. “I never thought this would happen.”

She also thought she was done having children. At 40 years old, she has one son – 8-year-old Kristian. She never expected another baby.

But she and her fiancée, Kevin, have adapted. He moved to North Attleboro from Rochester, New Hampshire, this month so he could join her in the family’s new apartment.

“It moved our plans up sooner,” she said, laughing. Their baby girl is scheduled to be induced, two weeks early, the week after Christmas. “I’m excited,” Charmine said, adding cancer was her primary focus this summer. But with the baby coming soon, that’s changing.

Her pregnancy and cancer have complicated each other and created especially challenging conditions for treatment.

Ironically, Charmine noticed the lump in her breast early this year, but she was busy healing from a shattered ankle, the result of a fall down icy steps. “I had to deal with that first. So, I kind of put off getting checked.” Eventually, her boyfriend urged her to see her doctor.

She had just received clearance to return to work after her ankle healed when she learned she had cancer. A week later, she learned about her pregnancy, which revealed itself through the bloodwork her doctor ordered as a work-up for chemotherapy.

Unable to conduct a PET scan because of her pregnancy, Charmine’s doctor quickly recommended surgery; he wasn’t sure whether she would need a lumpectomy or a full mastectomy. It turned out, she needed her entire breast removed. The cancer was also in the lymph nodes under her left arm.

She couldn’t begin chemotherapy until July, in her second trimester. Then, she began weekly treatments that will last until November. After her baby is born, she’ll begin radiation. She will also take preventative medication for the next 10 to 15 years and receive regular check-ups.

Charmine has been off work since January, due to her ankle injury and cancer. Now, because of her weakened immune system, her employer doesn’t want to expose her to the germs that are routine in a dental practice. She is also totally fatigued. But she misses work and has struggled with accepting assistance.

“I am used to working hard,” she said. “I don’t like asking for help.”

Cancer created financial struggles for her family, she said. The grant she received from the Joe Andruzzi Foundation helped her keep her car running.

But she’s even more thrilled that she got to meet Joe and Jen Andruzzi, and attend a Patriots practice with her son and fiancée in August. “He was so excited,” she said, of her son, a football player. “He loves everything football.”

It was an unforgettable experience, she said. “The Andruzzis are such wonderful people. I’m really hoping I can come back, when I feel better, and volunteer and give back to the foundation. Because they were there for me when I needed them.”

For Charmine, facing cancer and pregnancy together has reminded her of what matters most: the support and love of her son and fiancée. She’s also intensely grateful for the treatment she’s received from her “amazing” team of doctors, nurses and social workers at Sturdy Hospital in Attleboro.

Every day, she works to keep going, stay busy and be strong for her son. “It definitely changes your outlook on things,” she said. “Small problems aren’t as important as they used to be.” 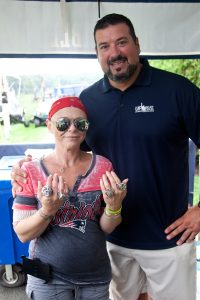 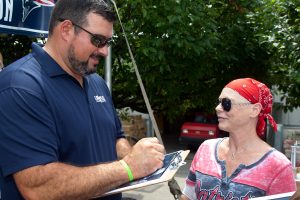