I think it was a big wake up call, that life is very fragile. It’s been a crazy ride. I’m definitely more aware and grateful.

All Kasey Gossom knew was that she felt tired all the time. She was only 24, but she nevertheless blamed it on getting older.

“I thought maybe I was just out of shape, so I started CrossFit,” she remembered.

But nothing helped. She turned 25 and still felt exhausted. Then, she noticed two swollen lymph nodes near her collarbone.

“Enough is enough,’” she told herself. She went to the doctor, but was only diagnosed with Cat Scratch Fever and given antibiotics.

She was only taken seriously after she went to the emergency room with chest pain in February 2016. That’s when a CAT scan revealed she had five tumors; she was officially diagnosed with Hodgkin’s Lymphoma.

Within two weeks, Kasey was undergoing biweekly chemotherapy treatments. Still, she continued working at a local salon and kept the apartment she shared with her roommate in Dover, N.H. “I don’t think I even wanted to acknowledge that I was sick,” she said.

Kasey, a Communications graduate of the University of New Hampshire; was still trying to figure out her career path when cancer took over her life. She was used to being independent, so she strived to keep her life as normal as possible.

In August, scans showed her cancer was still present. Her doctor recommended a stem cell transplant at Dana Farber in Boston. It meant a leave of absence from work and moving home to her parents. “I knew I would be really sick,” she said. 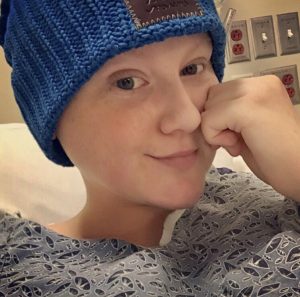 Her work was extremely supportive and set up a benefit for her, she said. And her parents and older sister took excellent care of her.

In February 2017, she checked in to Dana Farber for about a month of intense chemo. Travel to Boston, overnight stays and parking was very expensive for her family – a grant from the Joe Andruzzi Foundation helped cover costs.

Kasey also drew strength from her aunt, who survived cancer in 1983 after receiving a blood transplant from her father. “She’s my role model,” Kasey said.

After her treatment, Kasey returned home, where she was quarantined for 100 days. She was very sick, but it was hard to be so inactive. “Needless to say, I watched a lot of Netflix,” she said, laughing.

“Some days I felt lucky to be alive.” Other days, watching her friends live their lives on social media was tough.

She was able to continue treatment at the Seacoast Cancer Center in New Hampshire, which made life easier. “The center was amazing throughout my treatment,” she said. “They always made me feel so comfortable, and my doctor and nurses were great.”

She finished in summer of 2017 and slowly started to reclaim her life. Ahead of her lay three months of limbo, anxiously waiting for testing, “not knowing if it was gone.”

But in September, a scan showed she was in remission. Kasey still had a lot of pain, but every day she did a little more. “One day in December, I woke up and I wasn’t in pain,” she said. “It was so weird. I thought, is this what normal people feel like?”

Now 27, Kasey is making plans for her future. She wants to travel and help other young people fighting cancer. She’s working out. And she’s rebuilding her life, hanging out with her “amazing” friends, who literally sat by her side through treatment and recovery.

“I think it was a big wake up call, that life is very fragile,” she said. “It’s been a crazy ride. I’m definitely more aware and grateful.”