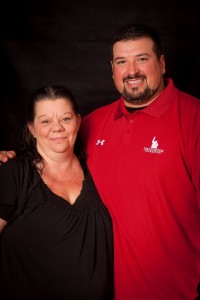 Ever wonder who our foundation helps – where the donation dollars go?

Meet Lisa Voveris, a 49-year-old single mother and grandmother diagnosed with cervical cancer about three years ago. Like far too many, Lisa put off her regular medical check-ups for several years. When she finally did visit her gynecologist, she was shocked to learn she had a cancerous tumor.

Her first thought? “I’m going to beat this,” she told us. Her youngest of three children – her son – was only 16. “I never prayed so much,” she remembers. “I just couldn’t leave him.”

She was extremely grateful to be in one of the country’s foremost cities for cancer treatment, and she was seen quickly at Dana-Farber Cancer Institute and Brigham and Women’s (where I also received my treatment).

Her plan was intense: 25 rounds of radiation, five weeks of chemotherapy and five surgeries. The first type of chemo she was given caused an allergic reaction and intense sickness, so a second type was tried. Thankfully, the plan worked and her cancer went into remission. But it was a very tough go. She was grateful for the love of her son, who would not leave her side. “We really bonded,” she says. “I don’t think I’ll ever be able to repay him. It was just above and beyond what any kid should be expected to do.”

But the successful treatment had some unintended side effects; Lisa still suffers from severe pain in her legs that prevents her from walking easily or standing for too long; even sitting in one position makes her numb. The disability has kept her from returning to work as a cook, which she enjoyed and misses. Her doctors can’t entirely explain her condition, but hope time will bring healing, she says.

Still, she hasn’t lost her sense of humor, or the fighting spirit that helped her beat cancer. “People say attitude is everything – it really is,” she says. She jokes that someone should invent a seat that will allow her to cook without standing. “Can I just get a side stool and zip down the line?”

But it’s hard to pay the bills, living on disability. A few years ago, Lisa learned about the Joe Andruzzi Foundation and kept our contact information. And when she got behind on her electric bill last year, and the utility company threatened to shut off her lights, she asked us for help. I am proud to say we were able to write a check that kept her power on, as well as send along a gift card that helped buy some groceries.

I was also honored to send her an autographed jersey for her son at Christmas; we’d met previously at a Foundation photo shoot and he’s a huge Patriots fan. Lisa told us she’d wanted to buy him a real jersey for a long time but could not afford to do so. I was so happy to fulfill that wish. I personally consider it one of the great joys of my life these days – that I can use my position as a former pro football player to give these small gifts that mean so much.

For people like Lisa and her son, these kindnesses come along at just the right time. And that’s our goal; to provide comfort and assistance when people need it most.

As Lisa told us, “organizations like this, that really help people, are like a Godsend. They just show up in the darkest parts of the storm.”