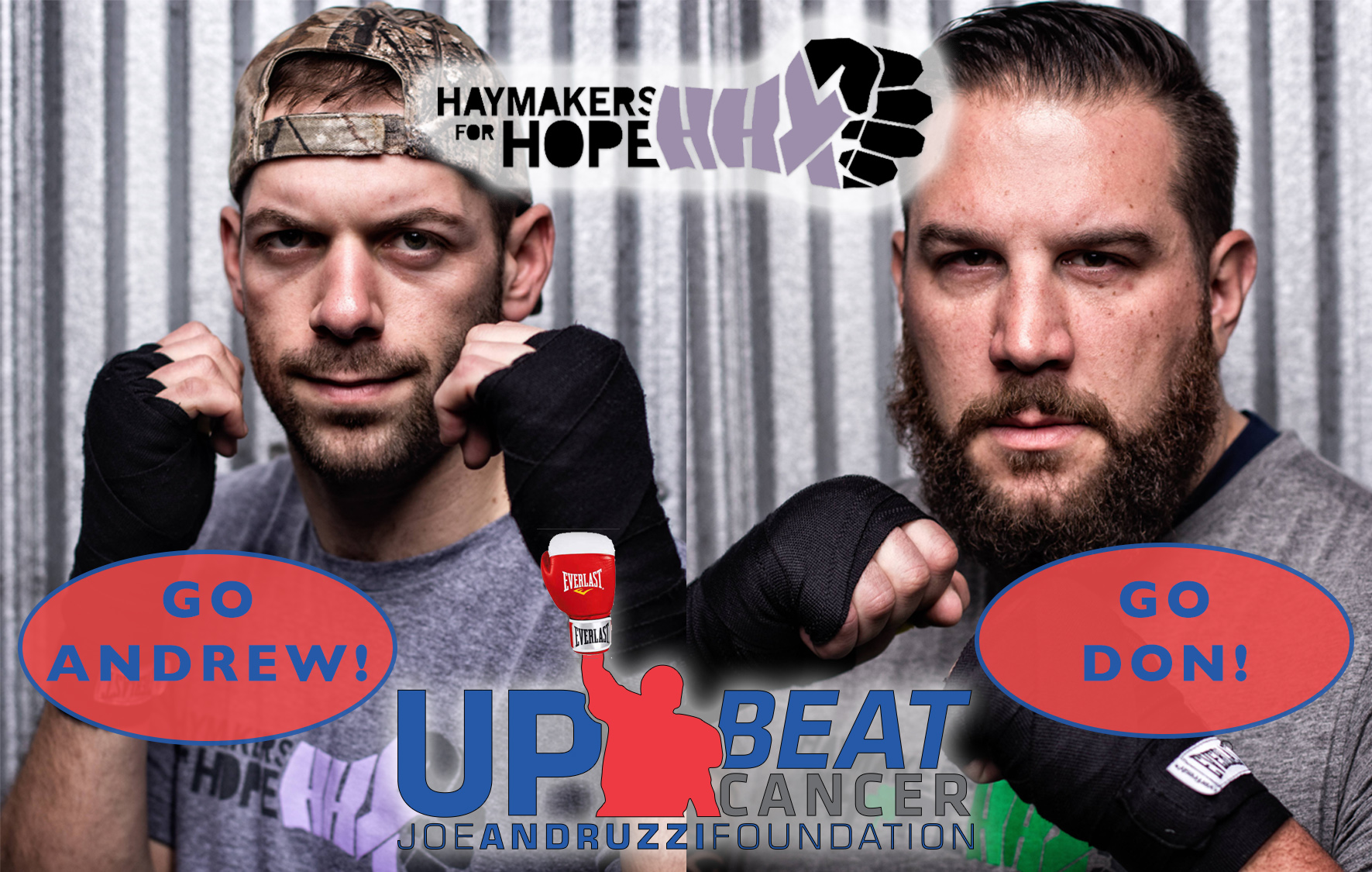 Haymakers For Hope – an official 501(c)(3) charity organization – began in the fall of 2009, when co-founders Julie Anne Kelly and Andy Myerson embarked on the grueling training process to compete in the New York City Golden Gloves. Julie was the defending champion in the women’s 132-pound division and was looking to defend her title, while Andy was competing to try and win his first. Julie and Andy decided that the grueling physical, mental, and emotional test of competing against the country’s best amateur boxers was not enough – they also wanted to raise money for cancer research and services, making the tournament an opportunity to literally fight against the disease. From there, the event was born.

On Thursday, May 19 at the House of Blues Boston, JAF supporters Andrew Gregory and Don McCarthy (a recent Team JAF Boston Marathon runner) will each step into the ring against opponents who are also raising money in support of area cancer-related charities.

All fighters can choose any cancer-focused non-profit to fundraise for, and we are honored that both Andrew and Don believe in our mission enough to select JAF. 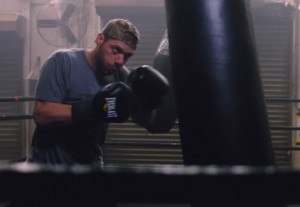 Andrew’s connection to our foundation comes through his employer, Cross Insurance. Brent Cross, an executive vice president at the company, sadly passed away on Thanksgiving Day last year after a spirited battle with cancer. Brent – and the entire Cross family – have long been supporters of the Joe Andruzzi Foundation, sponsoring our events and initiatives over the years. In a touching tribute, Brent’s obituary read “…those who wish to remember Brent in a special way may make gifts in his memory to the Joe Andruzzi Foundation”.

Needless to say, Brent has a special place in our hearts, and his connection to JAF made Andrew’s non-profit designation – in his words – a “no brainer.” 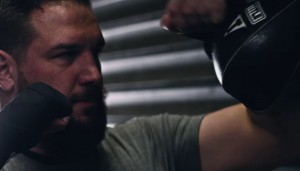 Don “Big Party” McCarthy also says the decision to fundraise through Haymakers for JAF was an easy decision. A long-time Foundation supporter, Don was at our 2013 Boston Marathon “Team JAF Watch Party” at Forum and jumped into action as a first responder after the bombings.

His experience inspired Don to train and fundraise for the Joe Andruzzi Foundation’s 2016 Boston Marathon team, and just a few weeks ago he triumphantly crossed the finish line on Patriot’s Day to the delight of our boisterous cheering section on Boylston Street. Not resting on his accomplishment, Don immediately began hitting the punching bag to support JAF in the boxing ring.

Now both Andrew and Don have a different finish line in sight; one each hopes will allow them to “retire” from the ring with undefeated (1-0) records.

We recently chatted with Andrew and Don to learn more about their training and how they feel heading into next week’s bouts.

First off – thank you both for fundraising and dedicating your bodies in support of our mission. How did you both come across Haymakers?

Andrew: “A friend of mine did it three years ago – it was awesome, we had a blast, and I specifically remember admiring all of the work that he put into it. That inspired me to apply to fight the following year, and then the next year, and I finally got selected for this year’s fight. It’s
such a unique atmosphere – people get so into it, and I can’t wait to get in the ring.”

Don: “I’ve actually been attending the event for years and have had friends that have fought. Last year, as part of my healthy movement, I applied to fight – but I was around 380 pounds, and they couldn’t find any super heavyweights to go against me.

A few weeks ago I got an email from an organizer who said they had me on file, saw that I had been getting in shape through the Boston Marathon, and told me there was an opportunity to fight because someone dropped out. It was a quick turn-around, but I immediately said yes.”

So how has training been going?

Andrew: “Until January 10th, I had never been in a boxing gym. There was certainly a learning curve to overcome, but I’ve been training seven days a week at the Jim McNally Boxing gym in North Reading, Mass. I’m there about two hours a day Monday through Saturday, hitting the bags and working on my conditioning. On Sundays, I go for a nice run – which I guess is my “off-day” – but I’m putting the time in because I want to do well. It’s easily the most intense exercising I’ve been through, and I quit drinking and have been eating really healthy. I’ve been all-in from day one. Also, Jim [one of my trainers] has been great. He is actually dealing with a very sick family member battling cancer, so he’s really bought into the mission.”

Don: “Because I am replacing someone who had to drop out, my boxing specific training started a little late, but training for the Marathon really helped get me in shape. I jumped into boxing-specific training about five weeks ago, and I’ve been sparring four or five nights a week at the Nonantum Boxing Club in Newton.”

What do you know about your opponents?

Andrew: “I don’t know too much about my opponent [Michael Culver], but funny enough, Don’s opponent – Joe Cresta – trains at the same gym I’ve been working out at.”

Don: “I actually know Joe a little bit – he’s a former marine who does great work with Veterans coming home from overseas. We have both been in the nightlife industry for years, and I’m really looking forward to the fight”.

What have been your inspirations as you train for the fights?

Andrew: “Really, it’s impossible to find anyone who hasn’t been impacted by affected by cancer. I’ve had many family members pass away from it – my grandmother, uncles – and my mother and sister both work at Mass General in capacities that have them interacting with patients. I’ve met Joe [Andruzzi] a few times before, and he’s such a good guy – and Cross Insurance is so close to the Foundation – so that’s a big part of it. My trainers have also been huge inspirations – the whole process has opened by eyes to a world I never knew existed. The gyms are amazing, and everyone is trying to push each other to get better.”

Don: “Coming off of the Marathon last month – I kept thinking about JAF and what it meant to me. My uncle was diagnosed with cancer back in the fall, and after four or five rounds of chemo – he came out the other side as a survivor. His wife is a two-time time cancer survivor, herself, and I had both of their initials written on my Marathon bib. All that running and training really gave me time to myself, and I used those extended moments of solidarity to think and gain perspective on their battles – and really, the battles all cancer patients go through. That helps me remember that the pain and fatigue I feel during training will eventually go away, but patients going through treatment have to battle with it constantly. That’s the mindset I’ll be taking into the ring with me.”

Want to help us cheer on both Andrew and Don at the House of Blues on Thursday, May 19? Be sure to grab tickets to the event while they last! (Select “Gregory” or “McCarthy” on the drop-down). Andrew will be fighting around 8:00 PM on fight-night, and Don will be a few bouts later, around 9:00 PM.

Can’t make it, but still want to support our fighters? Visit both Andrew (HERE) and Don’s (HERE) fundraising pages and make a donation towards their campaigns! Remember, proceeds go back to the Joe Andruzzi Foundation’s mission of providing cancer patients in treatment with help, hope, and a reason to smile through financial and emotional support!