On Friday, June 2, 2017, longtime friend and supporter of the Joe Andruzzi Foundation – Tim Conners – will complete the journey of a lifetime as he reaches the summit of the tallest peak in Africa: Mount Kilimanjaro.

While the trek is sure to have its challenges, the climb pales in comparison to the obstacles Tim has already overcome in his young life.

From the cancer diagnosis that ultimately claimed his vision, to bouts with heart, lung, and kidney failure, Tim has persevered through incredibly difficult circumstances. Now, he’s setting sky-high goals (literally) to inspire others to do remarkable things and live life to the fullest.

We recently spoke with Tim to get the lowdown on his MounTimPossible campaign, why he chose to fundraise for the Joe Andruzzi Foundation, and how he plans on tackling one of the most daunting mountains in the world.

JAF: Take us back to when this journey all began for you…

Back in the spring of 2010, when I was 15 and a freshman at G. Ray Bodley High School in Fulton, New York, I started developing a pretty bad sinus problem. At the time I thought it might be some kind of wisdom teeth issue, so we decided to get them removed. Following surgery, I started to develop Bell’s palsy on the side of my face. Again, we figured it was just a side effect from the wisdom teeth removal. Unfortunately, it wasn’t getting any better.

I remember, one night, waking up mid-panic attack. Something wasn’t right. I just couldn’t breathe. I went to my doctor’s office who then immediately referred me to the Upstate Golisano Children’s Hospital for further tests. Those first few hours at the hospital were so difficult – things seemed to be getting worse, and I couldn’t keep anything down.

I can vividly remember the look on my face when my dad walked into my hospital room a few hours later. He delivered the worst news a parent can share with their child: I had cancer. T-cell acute lymphoblastic leukemia, specifically.

It was such a life-changing moment. X-rays showed a football-sized tumor in my chest, crushing my lungs, which explained the breathing problems I had been experiencing. On Friday, I was a normal 15 year-old at home, and on Saturday I was diagnosed with cancer and started chemotherapy later that afternoon. Doctors said if I had waited until Monday to seek medical attention I may have suffocated.

For about three months I was in remission. That was the beginning of what would be known as a “new normal” for me.

JAF: Where did things go from there?

Sometime during July of 2010 I started developing these strange, floating fuzzies in my line of sight. I’d be looking out the window mid-day and it would look dark outside, so we decided to go back and see my doctor for a follow up.

Again, doctors delivered jarring news – this time, the scans were showing an abnormal cell growth. The cancer was back, this time in my eyes.

The game plan was an emergency surgery to lance my optic nerves to remove pressure from my eyes and to salvage what little vision I had left. As I was being wheeled into the operating room, I remember screaming for my mother. I grabbed her by her face and told her that if I was going to lose my sight completely, I wanted her beautiful face to be the last thing I saw.

When I woke up, my vision was gone forever.

JAF: What was that moment like for you? How did you deal with the weight of knowing you would never see again? 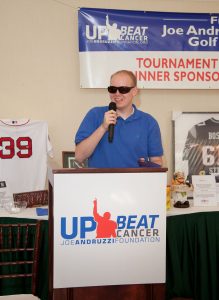 I just kept telling myself that my vision-loss was just a byproduct of treatment and that it would eventually come back. I had my moments of denial, but I didn’t have time to dwell on it because my cancer had returned and the regular course of treatment no longer was working. Life and death took precedent, and the doctors decided I needed a bone marrow transplant. Thankfully, my brother was a perfect match.

Ultimately, the transplant was done at Boston Children’s Hospital, but my troubles continued. In the days following, I had heart, lung, and kidney failure. For the most part, I feel lucky that I don’t remember any of my stay at Children’s – but it would have been cool to remember one special visitor I was later told about.

Joe [Andruzzi] had been visiting cancer families on 6-West at Children’s and popped into our room. My parents later told me how well they hit it off with Joe and how much his visit meant to the whole family. My brother is a huge Minnesota fan, and Joe followed up with tickets for he and my father to go to a Patriots/Vikings game.

When I think back on it, I’m still moved by the kindness Joe showed during that difficult time – and not because of me, but because he could see what my family had gone through, caring for me, by my side, for months on end. He wanted to give my family a fun day away from it all; something they could be positive about.

JAF: What was the transition like – leaving Children’s, returning to New York, and resuming the life you had been living but without your sight?

After 100 days straight in the hospital, and over a month at Galisano Children’s Hospital, I returned home that December. I couldn’t walk, and I certainly wasn’t strong enough to make it upstairs to my bedroom, so I lived on the couch for months. I always had to have someone there to assist me – and my mother, of course, stepped up and slept on an air mattress next to me for that entire stretch. She was my rock.

My immune system was still so compromised from the bone marrow transplant that there were limits on who could come in our house – even the slightest cold could have turned fatal. 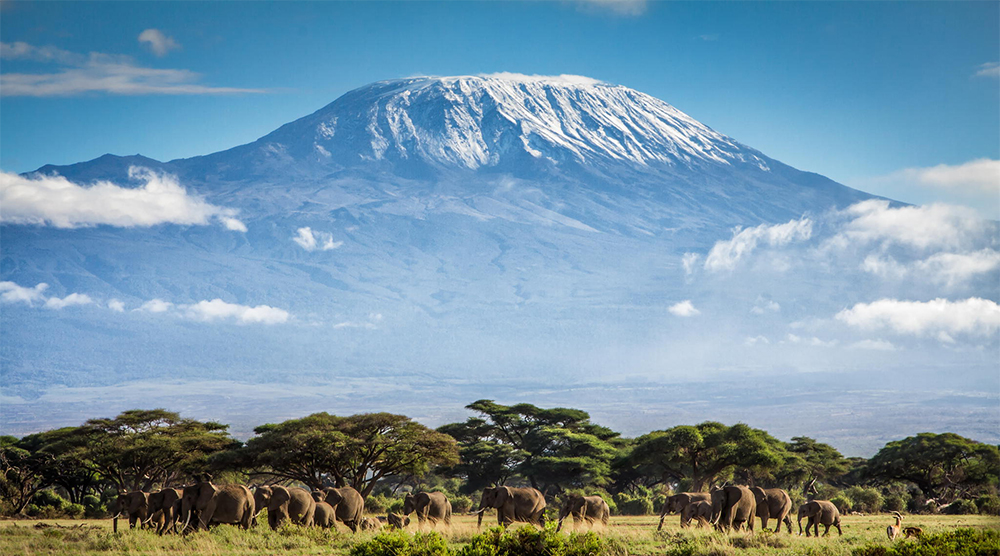 When I returned home from the hospital, and throughout my recovery, I had moments thinking that life wasn’t worth living. It was around that time I came across a book by Erik Weihenmayer – who, in 2001, became the only blind person to reach the summit of Mt. Everest. That was a huge turning point in my life. I ended up meeting him through Make A Wish, and he inspired me to not wear leg braces any more. After meeting Erik, I was determined to walk, and live, on my own.

Learning about Erik’s story was that “ah-ha” moment that helped me establish my life’s goal of turning negatives into positives. It helped me understand that the power to control our lives is in our hands, not our circumstances.

Most of all, I learned not to place limitations on myself. No one was going to tell me what I could and couldn’t accomplish anymore. Certainly not cancer.

People hear that word – “cancer” – and they associate it with fear and change, but I quickly learned it’s just a word. It gets associated with death, but I remember thinking at the time, “I’m 15, I’m still alive, and I’m still Tim.”

That helped give me the strength to reclaim the life I had been living before cancer. By junior year I decided it was time to go back to school.

JAF: That must have been a scary, but gratifying, time for you…

It definitely wasn’t easy at first. I would get exhausted going from classroom to classroom. On my first day back at school I actually had to lean on the lockers walking between classes and slide to the floor because I thought I was going to pass out – it made me very self-conscious. But it’s in those moments when you find you strength, and my drive was the direct result of the amazing friends and family members who rallied around me.

By the end of my high school career I had graduated seventh out of 200-plus students in my grade, and I earned acceptance to Ithaca College. I not only wanted to live my life to the fullest, but I started feeling the itch to inspire others to do so as well – just as Erik had done for me.

I began sharing my story with others around the country, and I even wrote a book! I just wanted to share my message with people and empower others. There is nothing I take more pride in.

JAF: Tell us about “MounTimPossible” – what was your inspiration?

The inspiration came in the summer of 2015 when I attended a “No Barriers Summit” program that taught me one of my favorite life lessons – that what is in me is stronger than what is in my way. While there, I learned stories of disabled individuals who accomplished amazing physical feats – swimming great distances, climbing the world’s highest peaks. It was there that I caught wind of a video of a disabled person climbing Mt. Kilimanjaro. I thought: I am going to do that; that’s my next big thing.

Not only did I want to climb Mt. Kilimanjaro, but it was very important for me to give back however I could throughout the process – so we turned it into a fundraising campaign. From there, the mission grew into what is known today as “MounTimPossible,” which includes our goal of working on raising over $500,000 for some very special charities and organizations.

For the beneficiaries, I settled on four amazing organizations that changed my life and the lives of so many other children with disabilities and life-threatening illnesses: No Barriers USA, The Upstate Golisano Children’s Hospital, The Michael Napoleone Memorial Foundation, and, of course, the Joe Andruzzi Foundation (JAF). 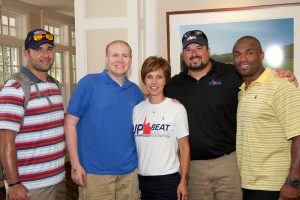 Our family never applied, or received, financial assistance through JAF, but I’ve always felt such a close connection to Joe and Jen [Andruzzi]. Years after Joe met my family at Children’s, I was invited to speak at JAF’s annual golf tournament in 2013 – and that was well before I even started doing any kind of public speaking or tours. Jen, Joe, and the Foundation saw something special in me, they always stayed in touch, and I’m so honored to be raising funds through my mission in support of theirs.

For the climb, I’ve partnered with K2 Adventures Foundation, which cares for children, adults and families with special needs and/or life changing medical circumstances by providing services, support and funds to be used for educational and medical enrichment. They aim to help individuals realize their own potential and live their lives far beyond their expectations – which is right up my alley! 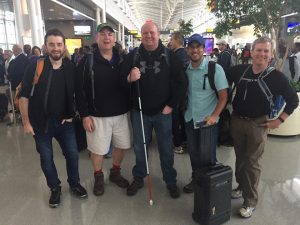 We have an amazing climb team ready to attack the summit, and we will arrive in Africa on May 24 where we will first be working at an orphanage with about 80 visually impaired students. My hope is that we can inspire them to overcome their circumstances and pass along hope.

It will take eight days to reach the summit – as of now, that looks like June 2 – and all of our supporters can follow along my Facebook page for daily updates, photos, and videos. We are going full throttle.

JAF: How can those interested in helping support you and your mission?

From now through the climb, you can make your donation at www.k2adventures.org/donate (click on “Allocation” and select “MounTimPossible – Timothy Conners”).

Again, proceeds will benefit the four organizations that changed my life – and, most of all, your support will help redefine the word “possible” in the lives of so many in need.

As I always say, “I believe we can move mountains if we move them together.” 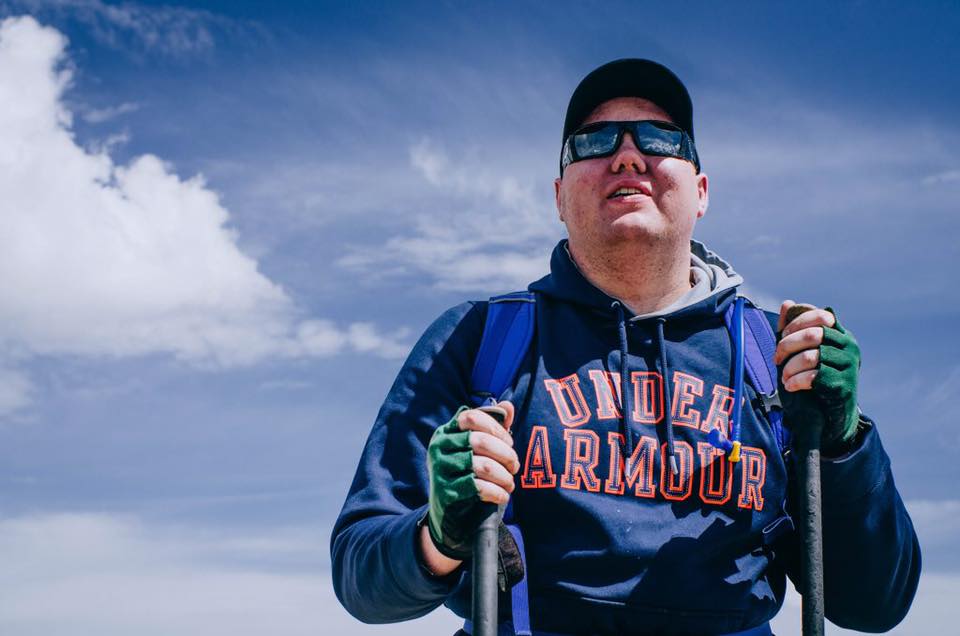