When Anne Freeman learned she had cancer, she was in the most fortuitous place: the parking lot of her spiritual director.

The 53-year-old Roslindale mother works in deaf ministry and was on her way to her monthly appointment with her director, who helps ministers nurture their own relationship with God.

Her phone rang. It was the surgeon who had recently removed a grape-sized mass from her uterus. The biopsy revealed cancer, she told Anne.

“As she was talking to me, I had this vision of a giant hand holding me,” Anne remembers. After she hung up, she went in to see her director and they talked it through. It was the perfect place to be.

Anne considers herself fortunate, in terms of her cancer experience. 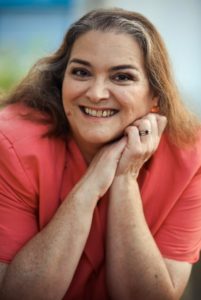 She experienced early symptoms in November 2015 – a kind of extended menstrual period that could have been fibroids or uterine cancer (which runs in her family). Pelvic ultrasounds revealed the mass. By June 2016, she was undergoing a complete hysterectomy at Beth Israel in Boston.

“I was very fortunate because it was found at Stage 1,” she says. “Endometrial cancer, if you catch it in the early phase, is very treatable.”

Anne was in the hospital for a day and a half after her 4-hour surgery. She just remembers giving up her wedding ring and being asked to count down from 10. “And I didn’t get to 7.” When she woke up, her husband Jack and 12-year-old daughter Christina were there.

At home, she “basically did nothing for six weeks,” she remembers. Friends from church brought meals and helped with her daughter. Anne worked on a massive scrapbook project for a friend. (She loves to scrap.) “It’s a sedentary activity, so it was perfect.”

She didn’t need chemotherapy or radiation, and she didn’t experience much pain or any complications, she says. Later, she did notice swelling in her right leg, a result of having 27 lymph nodes removed during surgery. But she’s been able to manage it with a diuretic.

She also lives proactively, as if she has Lynch syndrome, which also runs in her family. But she’s turned down testing for the disease, which can lead insurance companies to deny new life insurance policies, she says.

For the past two years, she’s received a check-up every three months; now, they’ll go to every six months for two years, and finally every year. So far, she’s remained healthy and clear.

She credits her faith for getting her through. “It’s a good time to practice your faith, if you have any,” she says. “I can’t imagine going through this with no faith.”

Anne is grateful to JAF for the financial help the organization provided when she took time off work during her surgery. A sign language interpreter, Anne works under the umbrella of The American Baptist Churches of Massachusetts and as a freelancer for the Commission for the Deaf.

She also voluntarily manages a resource for people of all denominations to find churches with deaf leaders or interpreter services.

Her hospital social worker told her about JAF, which provided grocery gift cards and help with the monthly oil bill. “It helped patch us through. Don’t be afraid to ask for help,” she advises. “And if there’s something you need that’s not being offered, ask for it.”

Having cancer has reinforced what’s important in life and helped Anne prioritize.

“We all have to go some time of something,” she says. “I realized this could end my life prematurely, so I try to do things that are more fun.

“Do more of what you love. On your deathbed, you’re not going to wish you had a cleaner house or worked more overtime.”