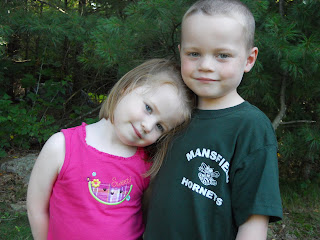 As any parent will agree, we can tell our kids something hundreds of times and never know that it registers. We also offer stories of hope, inspiration and courage to help them through the tough times based on our own experiences. We want them to know that they’re not the only ones to feel a certain way.

In fact, that’s exactly what Joe and I do when meeting with families in the cancer community. It gives us great pleasure to help others through a similar situation. We relied on so many people ourselves. I think that’s why I was so touched by this story.

Kevin Rich, age 5, complained about knee pain one day and was diagnosed with leukemia the next. During treatment, Kevin’s mom, Cara, talked about famous people that had beaten cancer to help Kevin remain positive. Introduced through a mutual connection, Joe visited Kevin and his family just three months after Kevin’s diagnosis. (For more of Kevin’s story see https://joeandruzzifoundation.org/pdf/SpringNewsletter.pdf)

More than a year later, Cara watched Kevin and his younger sister, Hannah, bring EVERY stuffed animal to the kitchen. Kevin announced to the stuffed animal “fans” sitting in the “stadium” that they were about to watch a football game. Then Kevin declared that he played for the Patriots and used to have cancer. The question posed to the “fans” was whether any of them wanted to take a picture with him.

Cara asked more specifics about this game. Kevin said he was a certain football player that had cancer and was helping out the kids that also had cancer to make them feel better. “You know, mom, like Joe Andruzzi,” Kevin said.

I thanked Cara for sharing this incredible story and it warmed my heart to know that we’re actually connecting with fans of all ages. This makes everything we do with the Joe Andruzzi Foundation worthwhile. Parents take note — keep sharing the stories and guiding your children. It’s working!