It’s been a magical run for the New England Patriots on their way to Super Bowl LI – and the team’s recent playoff success is a direct result of a very strong regular season.

Admittedly, we’re biased – but we were particularly giddy throughout the season each time the Pats lit up the scoreboard thanks to year-two of our Goal Line Giving campaign with Empower Retirement.

Last September, we launched the campaign in partnership with Empower who pledged to donate $100 towards the Joe Andruzzi Foundation’s Financial Assistance Program for every point New England scored during the regular season. After a successful year filled with numerous touchdowns and field goals (and even a few safeties), New England scored a total of 458 points – equaling a donation of $45,800.

And that’s why we’re THRILLED to announce that our good friends and supporters at the retirement services provider have decided to round up its end-of-season Goal Line Giving donation to an even $50,000!

We are so grateful for Empower’s generosity and are humbled to participate in such an impactful partnership for the second year in a row. Thanks to Empower Retirement, and the value they see within JAF’s mission, we can now reach out to more families to relieve some financial stress so they can focus all of their energy on battling cancer.

The Goal Line Giving partnership also allowed JAF and Empower to work together to raise awareness for the Foundation’s to drive donations and greater visibility for the needs of the families we serve.

“It’s with tremendous pride that Empower supports the mission of the Joe Andruzzi Foundation to help families with great needs during difficult times,” said Empower President Edmund F. Murphy III. “Through the team’s extraordinary performance, New England has certainly made this a thrilling football season and it’s been great to turn their on-field success into a winning opportunity for these families.”

Thanks again to everyone at Empower Retirement for their unbridled big-heartedness, everyone who followed along and supported the campaign through social media, and, of course, to the hometown team who ultimately point the points on the board! 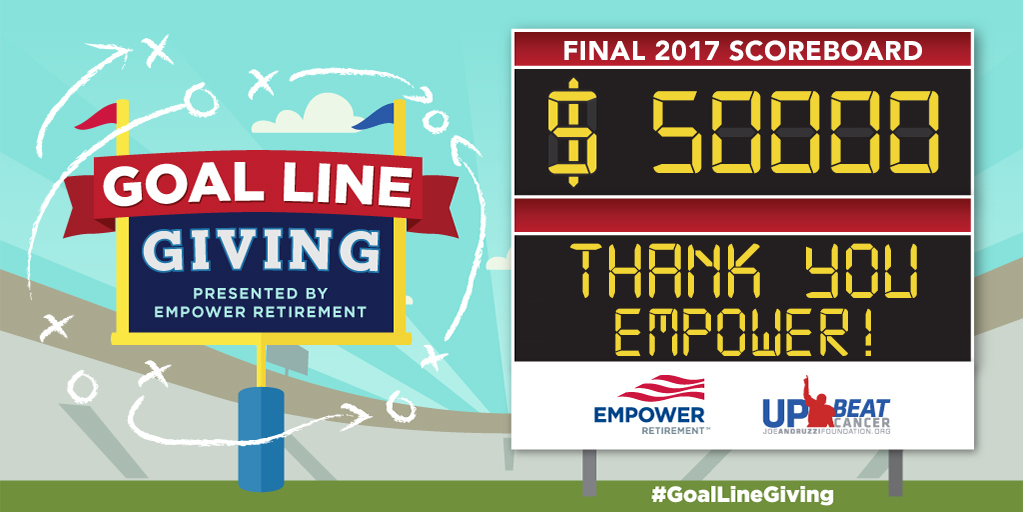