"You just don’t realize you’re going to get into financial trouble, and by the time you realize it, it’s too late.”

Early in 2018, life was moving along pretty nicely for Jonathan Oates.  He and his girlfriend Anna, both paramedics, had just bought a house, and both were putting all their energy into making it their own. They were doing yard work, painting, landscaping, and porch improvements, among other things. The list was long, but they were happy to put in the time. Luckily, they had similar work schedules. As paramedics, they would each work 24 hour shifts, then take 24 hours off, and they managed to make it work so they were home together quite a bit. With any spare time they had, they would visit with Jonathan’s grown children and his grandchildren, and occasionally go out for dinner with friends.

For the July 4th weekend in 2018, Jonathan and Anna decided to take a trip out to Idaho to visit Anna’s family. It was a 12-day trip and they were both looking forward to getting away. Jonathan decided not to shave and grow a beard during the trip, and they took off and enjoyed their time away. On the day they were to head back east, Jonathan decided to shave the beard before they left. While shaving, he noticed a lump on his neck. One that had not been there twelve days ago.

He didn’t think much of it, and figured it just was a swollen gland due to an infection from getting his teeth cleaned three weeks earlier. The dentist gave him an antibiotic, but the swollen area grew instead of shrunk, so Jonathan knew he needed to get this checked out as soon as possible.

It was late July by the time he saw his PCP. He had an ultrasound done, and then a needle biopsy. Both showed nothing. It was just a cyst and Jonathan was in the clear. But his doctor wasn’t quite convinced, saying he had seen false negatives before, and that it’s possible it could still be cancer. He urged Jonathan to get a surgical biopsy, which was a bit more complicated, but was worth doing. That also came back negative. Still, Jonathan’s doctor wanted the cyst completely removed to be certain. So, Jonathan was set up for surgery to do just that. It was to be a relatively simple two-hour operation. But as it turned out, the surgery took 8 hours, because when surgeons took out the cyst and did an immediate biopsy, it came back as cancer. That meant a neck dissection. It would require an incision from the bottom of the chin to the bottom of the right ear to remove the cyst as well as almost 40 lymph nodes. Jonathan knew none of this. He was under anesthesia. When he was put under he was thinking he was having a cyst  removed and that he’d be back at work in a week or two. But instead, he woke up to 26 staples and drains in his neck, and the stunning news that he had cancer.

At first, he didn’t even process it. He was still groggy from the anesthesia. In time, as his mind became clearer, Jonathan, who considers himself a very positive person, took the attitude of, ok, what do we do now?

He stayed in the hospital for three or four days, and when he went home, Anna, being a paramedic, knew exactly how to take care of him. His doctors told him to start eating to bulk up, because he would be losing weight once treatment started.

By now it was the holidays, and while Jonathan enjoyed them as best as he could, he knew what was coming. On January 2nd, the radiation treatments started. 30 treatments in total, 5 a week for 6 weeks. But there was an issue. Doctors couldn’t quite pinpoint the location of the cancer, so their only choice was to radiate the entire neck area.

It was brutal. After the first seven days, which weren’t bad, things got worse in a hurry. Jonathan developed a thrush in his mouth and then mucositis, which were very painful. “It was a pretty tough 30 days,” Jonathan says, “I was hurting physically and emotionally I was starting to lose my positive attitude.”

His last treatment was February 12th, and he was hurting so badly he wound up going to the hospital in an ambulance. He spent a week there, and when he went home, things continued to go downhill. He lost another 16 pounds, for a total loss of 36 pounds in all. All the doctors could do for him was tell him to wait it out. That’s when he got to a social worker, who set him up with a nutritionist to try and help him gain some weight back. Jonathan was getting nervous about his situation. He had no energy in the morning and it was all he could do to get out of bed. The prospect of working wasn’t even close to being a possibility. Anna had also been taking time off work to care for him. They were basically down from two full paychecks to maybe half of one paycheck. On top of the typical monthly bills a new home owner might expect, there was also a deluge of medical bills. They went through savings and even had to start using credit cards. A colleague knew Jonathan wasn’t working and mentioned the Joe Andruzzi Foundation (JAF) and that it might be worth looking into. It was. After applying for a grant, JAF assisted in paying Jonathan and Anna’s monthly mortgage payment. It was a huge help.

Jonathan says, “The people at the Joe Andruzzi Foundation were incredibly helpful and understanding. They didn’t make me feel like I was asking for charity. There was no judgement. They just asked what they could do for me and it really eased my mind. I’ve been helping people for 40 years, so to have someone help me was foreign to me. But I was definitely grateful.”

Jonathan is sharing his story because he wants to return the favor.  He is hoping that by sharing what happened to him that it will inspire others who need help to ask for it. “I thought I could do it all on my own. You just don’t realize you’re going to get into financial trouble, and by the time you realize it, it’s too late”, he says.

Today, as of this writing, Jonathan and Anna are still trying to get back on their feet financially. The good news? His scans show he is cancer-free. For now, he goes in every three months for scans. In time, it will be every six months. Then once a year.

“I’d say I have cautious optimism. It hasn’t quite sunk in yet that I’m cancer free, so I’m still a little scared,” he says. “I’m not quite where I want to be with my health. I’ve only gained back 6 pounds and not quite feeling like my old self just yet.”

But he’s back to working one 12-hour day a week and getting back to a normal routine.

“I’m working in the yard and doing small projects around the house as I feel I can. It’s just nice for everything to be heading in the right direction.” 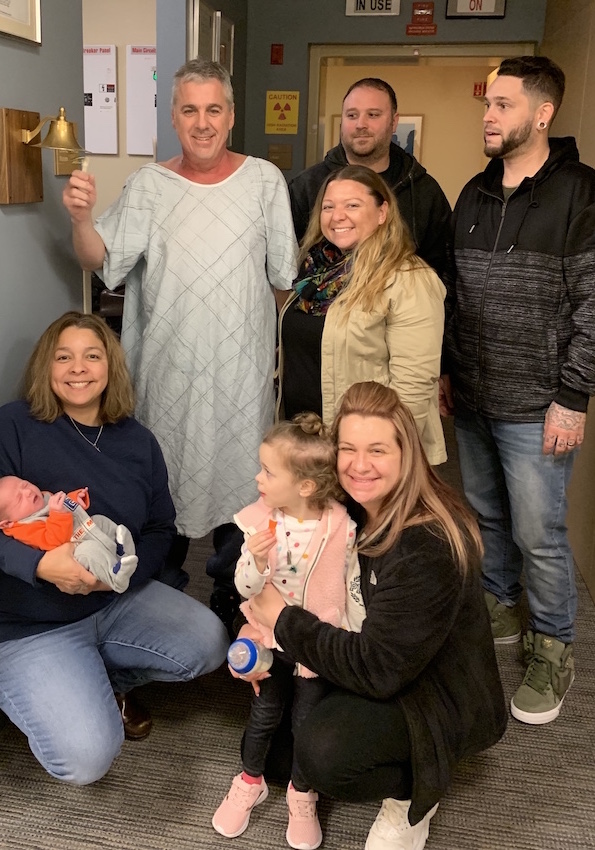