Lauren Gregor may have joined us not long ago, but this 28-year-old Boston University grad student is giving this marathon her all, as she runs to honor her father’s memory and her aunt’s remission from breast cancer.

Thank you for joining Team JAF, Lauren, and for your empathy and understanding of the families we serve!

JAF: What inspired you to run for JAF this year?
Lauren: When I was six years old, my father passed away from lung cancer, and my mother had to raise and support me and my two older brothers on her own. I still don’t know how she did it, but to be able to give back to families struggling in the same situation means a lot to me. I am also running in honor of my Aunt Susie (my dad’s sister) who is currently 5-plus years in remission from breast cancer. 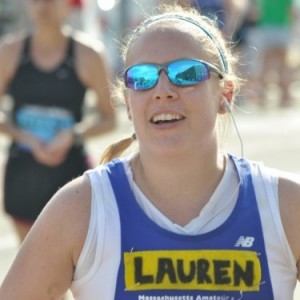 JAF: What’s your fundraising goal and how are you meeting it?
Lauren: I joined the JAF with only 45 days until the marathon, and I am setting a personal goal to raise $1,000 in 45 days. Since I’m late to the game, I’m going to do a March Madness pool, sell some homemade dog biscuits and hopefully get an item to use as a raffle prize to get people excited about donating.

JAF: What’s on your marathon resume?
Lauren: My only other marathon was the 2012 Boston Marathon in that brutal heat!

JAF: How do you train?
Lauren: Training is going great. I run three days per week (hills and long runs with the charity teams), and then do some cross training, like yoga and weights, as well as playing soccer.

JAF: How do you stay motivated to train in winter?
Lauren: Just knowing that I’m out there running and getting fit while so many other people are sitting at home.

JAF: Do you do other charity work?
Lauren: No, I don’t, but I would like to when I finish graduate school and have more free time.

JAF: Got a theme song?
Lauren: For a running song “Stronger” by Kelly Clarkson; for a Boston Marathon song “Running Up That Hill” by Placebo.

JAF: What would surprise non-runners about marathons?
Lauren: How far you can actually force your body to go. That first 20-miler training run is an unbelievable experience and accomplishment.

JAF: Runner’s high… myth or reality?
Lauren: Completely real! I didn’t believe it until I really got into running. I have run five half-marathons and I thought I would only feel it during longer runs. But after doing a 10k and a 5-miler, I’ve found you always get the high when you see the finish line ahead of you.

JAF: What’s the best training snack?
Lauren: I love Goldfish pretzels and Fig Newtons while running, as well as Swedish fish. A little salt and a little sugar does the trick.