Paul Keenan is no stranger to the Falmouth Road Race. Having completed Falmouth several times, Keenan is back running after deferring his guaranteed race entry the last two years. Only this time, he’s no longer running for just himself. 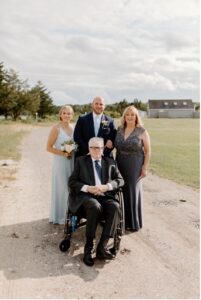 In February of 2021, Keenan’s Dad was diagnosed with Stage IV metastatic prostate cancer that’s now made him partially paralyzed due to damage done to his back by a tumor. It was a diagnosis filled with spending a significant amount of time in hospitals as well as Keenan’s parents having to change up their living situation.

“My parents have now had to renovate the house and build a full bathroom on the first floor since he’s wheelchair-bound,” Keenan said.

In the weeks following his father’s diagnosis, Keenan’s younger sister had gone in for a biopsy. What followed was Keenan getting a call from his mom who was with his sister. Keenan’s sister was diagnosed with Stage III ovarian cancer.

Keenan had been looking to get more involved with a charitable foundation in any way he could following the diagnoses. He had heard of the Joe Andruzzi Foundation through its presence at such events as Falmouth and the Boston Marathon. He came across JAF’s Young Professionals Council and joined that along with becoming a JAF Bridge Builder.

Becoming more involved with JAF, Keenan took it one step further. With a guaranteed bib in hand, Keenan decided to run for the Foundation.

“Why not use this to raise some money for a charity and something I care about,” Keenan said. “I just saw and felt how stressful [it was] and how that can your family’s world upside down and the cost of that financially, physically, emotionally for everybody. It’s not something you necessarily tend to think about.”

“Why not use this to raise some money for a charity and something I care about,” Keenan said. “I just saw and felt how stressful [it was] and how that can your family’s world upside down and the cost of that financially, physically, emotionally for everybody. It’s not something you necessarily tend to think about.”

Adding further to that, Keenan mentioned how he’s known others who’ve experienced the cost of cancer and the financial toxicity around it. It added more fuel to his fire of running Falmouth.

Keenan’s back into the swing of things with returning to the road race. Along with getting ready for the hilly aspect of the race, especially the last one.

“I always think I’m ready for [the last hill],” Keenan said. “But when that adrenaline’s starting to run out, you’re like ‘man, I know this last hill is going to kick my butt,’ but it’s almost over so you’re just preparing for that mentally and physically.”

When Keenan was asked how he’d describe running for the Foundation to a newcomer, he highlighted the significance of JAF’s objective.

“JAF’s mission is an important, but I think often overlooked [mission]” Keenan said. “A cancer diagnosis can change a patient’s and their family’s financial landscape, creating holes that need to be filled. JAF is there to [help] fill those holes. It is rewarding to know what every dollar [amount] you raise as a member of Team JAF goes towards supporting that critical mission.”

Asked what he’ll say to his father and sister after finishing the race on August 21, Keenan went straight to the point.

“They’re the two reasons why I run for Team JAF.”