The last thing we needed to be focusing on was the added financial stress, and it was such a relief to get the support from the Joe Andruzzi Foundation.

While it may not fit the traditional Hollywood version of romance, Bryan will tell you that his own battle with cancer, which began in May 2018, is really all part of a love story.

Bryan is Canadian, and he met and fell in love with his American wife Briana at the University of Toronto in 2010. Their first year of marriage was spent together in Wales as she completed her Masters, but their second year was spent apart. Briana had returned to the U.S. to start a new job, while Bryan remained in Canada to begin the lengthy immigration process to be with his wife. The process was not an easy one and one of the requirements was a complete medical exam, including a chest x-ray to test for TB.

Bryan felt excited when he picked up his medical results last spring, as it meant he was one step closer to being together with Briana. Unfortunately, the news he received that day was completely unexpected – there was a note in his file stating that the x-ray showed a baseball sized mass snuggled up next to his heart and lungs, right in the middle of his chest.

The next few weeks were a blur of tests and doctor’s appointments. A CT scan confirmed there was a tumor, but to everyone’s relief at the time, doctors believed it was benign. Surgery was scheduled in July to remove the tumor, and since Brian had also received his green card by then, a few days later he was moving to the U.S., relieved to have everything behind him.

However, the happy ending to this love story wasn’t coming just yet. Four weeks later in August, while enjoying a vacation in Maine, Bryan got that life changing call that no 30-year old ever expects. The pathology results had finally come back and, unfortunately, Bryan learned his tumor was in fact not benign…it was synovial sarcoma, a soft tissue cancer, usually found in the joints and limbs. Bryan was stunned and could only wonder what it was doing in his chest. It certainly wasn’t caused by lifestyle or genetics, yet it was there just the same and he was faced with the fact that a total random fluke was about to change his life.

Following the diagnosis, Bryan and Briana’s lives were put completely on hold. All the excitement of moving to a new place and starting a new life together was suddenly gone. While their friends were getting married, having kids, and buying houses, their focus became cancer. Bryan began radiation to clean up any remaining cancer cells from surgery and prepared himself for chemotherapy.  Part of that preparation included sperm banking, as the treatment would leave him sterile. Facing that reality, Bryan and Briana decided to try to have a baby without medical help and were more than thankful at Thanksgiving in 2018, when they learned they were expecting.

But before they could experience their baby’s joyful arrival, Bryan had to endure a brutal chemotherapy regimen.  Due to his age and otherwise good health, Bryan was hammered with high doses and 6-8 hour infusions for three days every three weeks for a total of six cycles. The chemo was so intense it completely wiped out his immune system and he spent Christmas Eve in the hospital with a neutropenic fever. Bryan remembers having his pregnant wife sitting there by his side through the whole ordeal, each of them riding emotional rollercoasters – Briana’s as a result of hormones and Bryan’s from anti-nausea steroids.

During treatment Bryan was introduced to a social worker to talk through the many aspects of cancer that were impacting his life. They talked about Bryan’s isolation of not knowing anyone outside of his in-laws – and the impossibility of making new friends when you have no eyebrows and can’t leave the house without a face mask because of chemo. As Bryan jokes about it now, “It wasn’t my best look.”

Bryan also talked with the social worker about the overwhelming guilt he began to feel about bringing a baby into the world, knowing there was the possibility he might abandon and traumatize the child. On top of all the physical and emotional strain, there was also the financial stress of cancer treatment. Briana worked at a non-profit and now with only one salary in their household, it was hard to keep up with the cost of living and the unexpected costs of driving to and from treatment, not to mention all the medical deductibles. It was then that Bryan’s social worker introduced him to the Joe Andruzzi Foundation.

“I can’t tell you how helpful it was to know that there are people out there who don’t even know you, but care,” Bryan says. “Just before my first chemo cycle, as luck would have it, my car, which I relied on to get to and from appointments, bit the dust. The Foundation helped us with our new car payments and groceries. We really needed the help, especially since I was unable to work. Those steroids give you wicked bad munchies and I lacked the strength and stamina to find joy in much else besides the fridge. But seriously, the last thing we needed to be focusing on was the added financial stress; it was such a relief to get the support from JAF.”

Bryan finished treatment at the end of March this year and was able to land a job that he loves. In August, he joined Joe Andruzzi and other JAF patient grant recipients at the Patriots Training Day Camp, where he got to take pictures with and collect autographs from current players. But far better than either of those experiences was the arrival of his greatest joy – their baby boy, Oliver. Bryan said, “Seeing Oliver’s perfect face makes this whole journey worth it. Since the tumor was removed, all of my scans have been clear, and I’ve gained a lot of my former strength and stamina back. Although I am still working on my chemo belly.”

As Bryan will tell you, “I have to thank my wife Briana, for figuratively saving my life by marrying me, and literally saving it by finding the tumor in coming to the U.S.”. Which makes this a true love story indeed. 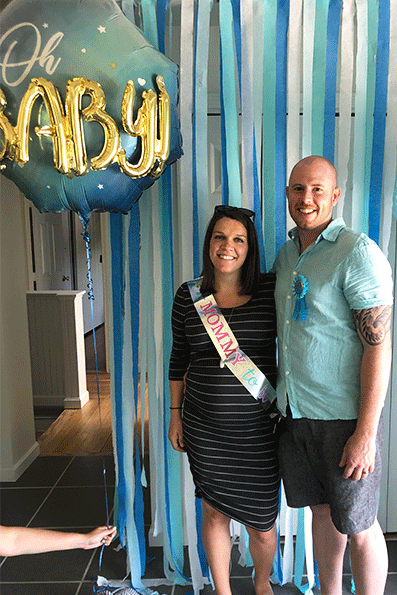 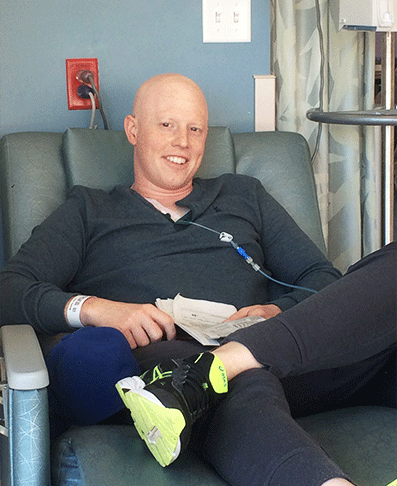 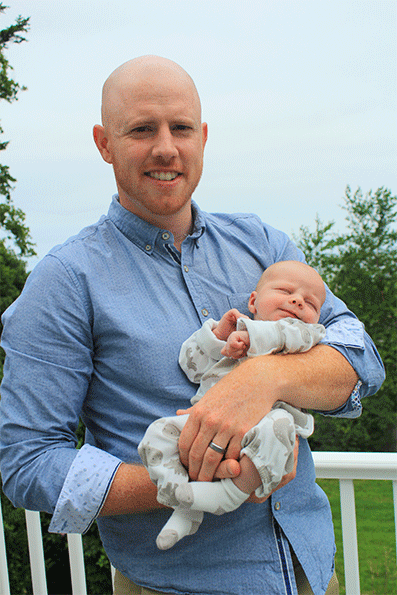 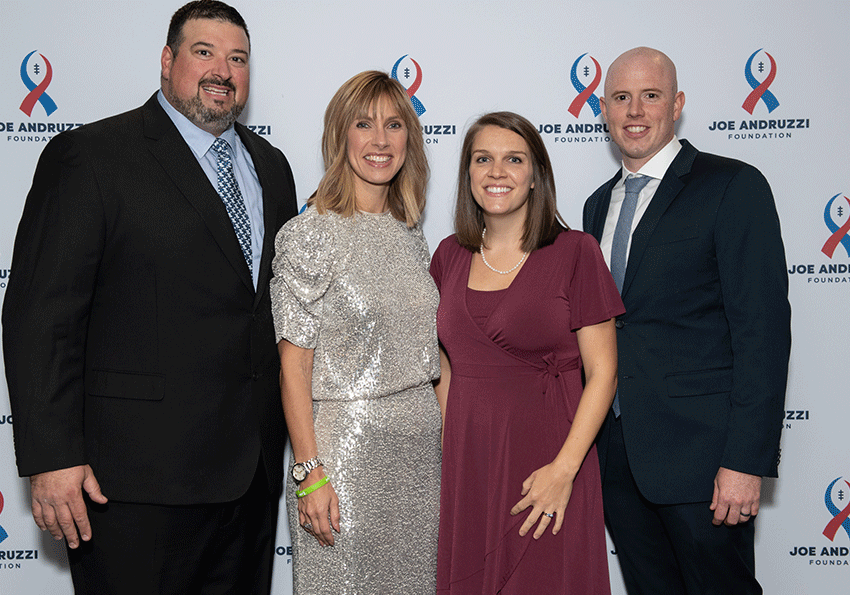 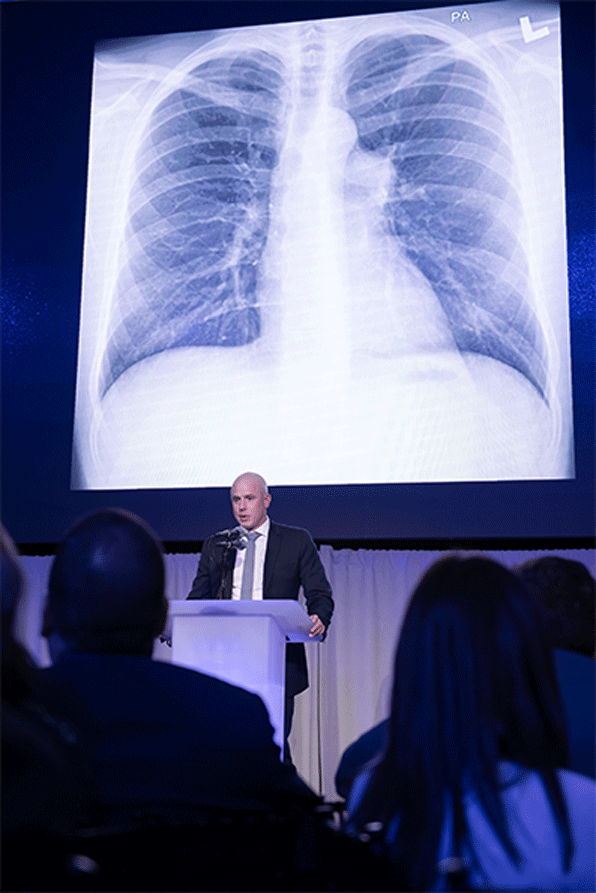 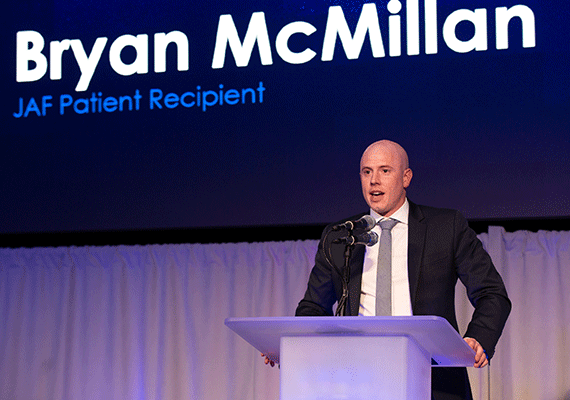