James Cole has run a marathon before. But for 2022, he thought the time was right to try his hand in his hometown.

The 33-year-old grew up in West Roxbury and used to go into the city on Patriots Day and watch all the runners. Then after college, he lived over by Fenway and always made a day of Marathon Monday.

James found running in his mid 20s, as a form of mental health. He started running some 5Ks, and ran the BAA’s 5K on Marathon weekend. It was an incredible experience for him to be able to touch a piece of the full route and cross the finish line. That was the moment that he realized maybe a 10K, half marathon, or even a marathon might one day be in the cards.

When he started the marathon process, he knew he wanted to focus on something revolving around cancer. Finding the right foundation was huge for James, and in the Joe Andruzzi Foundation (JAF), he found it.

James has not just seen but has lived the impact that a cancer diagnosis can have on a family. His mom Mary lost her battle with cancer in March 2006 from multiple myeloma in her mid 50s. James spent a lot of his younger years doing homework in hospitals. Through the experience, he also got an all too common up-front view of the financial burden a cancer diagnosis can take. 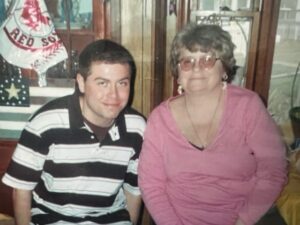 “Mom worked part time at a grocery store, her benefits were not good.” James said. “Seeing her in between treatments and getting notifications that the insurance was getting declined was a frequent thing… [I] saw the impact and stress that it caused and took away from her ability to transfer that into a healing aspect alongside of the treatments she was receiving. All of it instead was transferred to stress and anger about not being able to afford basic things.

Seeing his mom go through that is a big reason why James wanted to be a part of Team JAF – the Foundation’s athletic fundraising team – for the 2022 Boston Marathon. This will be James’ second marathon – he also ran the 2016 Disney marathon. After the craziness of the last few years, he felt like the timing was right.

Running has become a great outlet for James with battling some of the depression and anxiety that came out of his mom’s death, as well as some other tough moments in life.

“[It’s a] great way to focus on channeling that into something other than just sitting and being sad.”

With Marathon Monday right around the corner, James thinks it’s going to be a very mixed emotion day as he runs in memory of his mom and his friend Josie, who also lost her battle with cancer in her late 50s in 2016. He knows it will be very humbling to see all the charities and all the hard work and all the sacrifices that people made.

But the biggest thing he wants for that special day – to not cry coming across the finish line.

“I am not going to cry when I cross the finish line, I just can’t do it” James said. “I want to cross not with a sad feeling but with gratitude that I was able to participate and give back to an organization that I wish was around when my mom needed the help most.”