Michelle Brousseau never considered herself to be a runner.

Then, she heard Cheri Blauwet speak at a work event in September of 2019.

Blauwet is a physician, but she is also a two-time Boston Marathon women’s wheelchair division winner and a seven-time Paralympic medalist. She spoke that day about the journey that led her to overcoming disability on the road to becoming a doctor, and how she became one of the top Paralympic athletes in the world during the process.

Michelle, an associate vice president for a medical technology company, was instantly inspired by Blauwet’s story. Michelle has also battled adversity – she was diagnosed with melanoma during a trip to the Emergency Department after a freak accident in chemistry class during her junior year of high school.

“I had burnt myself in class, but when they were treating my burn, the physician noticed that I had an abnormal mole on my stomach and recommended that I get it looked at right away. I had to have three surgeries to remove it, and luckily they caught it all early,” Michelle said.

After Blauwet’s speech, Michelle hopped on the treadmill and started training for the then-virtual 2020 Cape Cod Half Marathon, but adversity struck again. In September 2020, Michelle fractured her pelvis, and she halted her training. After she recovered, she ran her first half marathon this past June – the Bristol Independence Day Half Marathon in Rhode Island. But she still aspired to run a full marathon for a charity, and she remembered the Joe Andruzzi Foundation (JAF). 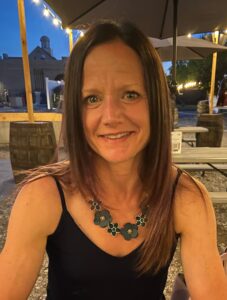 Two of Michelle’s friends were past JAF patient recipients. Combine that with her own cancer battle and the fact that she lost a grandmother and grandfather to cancer three decades ago, joining Team JAF – the Foundation’s athletic fundraising team – was an easy decision.

“When I decided I wanted to run for a charity, it had to be something that I was passionate about. We’ve lost family members to cancer. We’ve lost friends to cancer. I just feel like cancer touches so many people,” Michelle says. “I’ve heard the stories of how people struggle financially due to cancer and how scary that is. A diagnosis of cancer is scary enough, then all of these financial aspects that they shouldn’t have to worry about come into play. It was that that drove me.”

On Monday, October 11, Michelle will run the Boston Marathon with Team JAF to benefit patients battling cancer throughout New England. She’ll cross the same finish line that Blauwet has crossed many times before her.

“I’m looking at this person who had magnitudes of adversity to overcome to follow her dream and her passion. For her, it was just no big deal. It was just amazing,” Michelle says. “If running the Marathon is for a good cause, why wouldn’t I do it?”